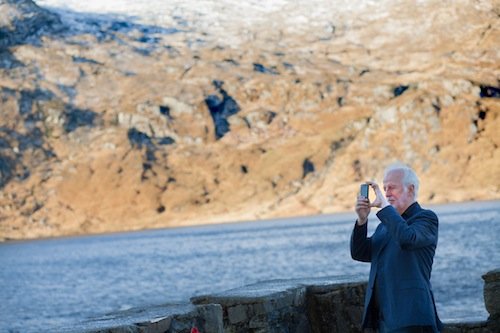 DONEGAL ACTOR SAYS GOVERNMENT ‘CLOWNS’ HAVE LET US ALL DOWN

Sean McGinley on a recent trip back to Donegal.

Donegal actor Sean McGinley has launched a stinging attack on the Government calling them ‘clowns’ and saying the Irish people deserve better.

The Ballyshannon man refused to hold back in a sharp-tongued attack on those in power in the corridors of Dail Eireann.

The 58 year old said the most annoying thing for him personally is to have to listen to how unemployment figures are going down.

He fumed “It’s infuriating when we hear that the live register figures are down, and excuse my language, but of course the figures have dropped – they’re all in f***ing Australia or America.

“Bu the truth of the matter is that we keep electing these clowns so maybe we don’t deserve better.”

McGinley, who has starred in such films as Braveheart as well as RTE crime series Love/Hate, was only in Donegal recently to launch the Donegal Film office website.

And he said the only reason why places like his hometown of Ballyshannon will see recovery is because of the hard work of local people.

“Like a lot of small towns in the country, businesses have closed and there are no young people left in Ballyshannon.

“But there’s an incredible bunch of people there who are getting on with things. These are people who just give of themselves to teach drama classes, they tidy the town, redecorate public spaces.

“They don’t sit around moaning. What they are doing, that’s inspirational to me,” he said.

DONEGAL ACTOR SAYS GOVERNMENT ‘CLOWNS’ HAVE LET US ALL DOWN was last modified: February 3rd, 2015 by Stephen Maguire