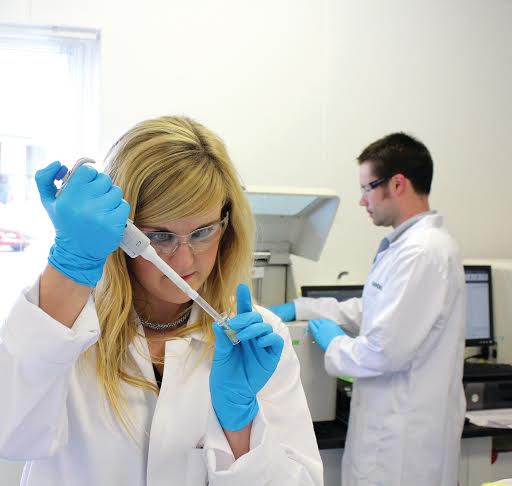 SCIENTISTS at Randox in Dungloe have developed a €25 bowel cancer test kit, the company has announced.

The new blood test will spot bowel cancer at earliest stage and the simple check will ID cancer missed by existing screening.

The kit also removed the need for ‘unpleasant’ faecal screen.

Bowel cancer is Ireland’s second biggest cancer killer and Donegal scientists have been at the heart of research.

On average 79 people in Donegal diagnosed with bowel cancer per year.

The new test could save thousands of lives by spotting the disease at the earliest possible opportunity. The simple check will pick up on antibodies in the blood, produced as the body reacts to the onset of bowel cancer.

The collaboration between researchers from the Biomedical Diagnostics Institute at Dublin City University and Dongeal biotech firm Randox Teoranta, promises that the new test will be a significant breakthrough in the diagnosis of bowel cancer and could be available for widespread use by the end of next year.

Each year almost 2,500 people are diagnosed with bowel cancer, with 1,000 dying from it; making bowel cancer the second most common cause of cancer death in Ireland.  To address this, a nationwide Bowel Screen initiative has been rolled out to check those between the ages of 60-69, thought to be at high risk.  This screening involves testing traces of blood in stool samples.

Drawbacks associated with this method, known as Faecal Occult Blood Test (FOBT), include low sensitivity, which means early stage disease is not detected in a rapid or reliable way.  In addition, the nature of the sample required for these tests has resulted in worryingly low levels of patient uptake.  The new blood test will do away with the need for FOBT and will prevent unnecessary and costly colonoscopies for people without the disease.

Professor Richard O’Kennedy, Scientific Director of BDI said: “Typically patients who experience the symptoms of bowel cancer may visit their doctor.  This new, quick and non-invasive test will help in identifying patients with bowel cancer earlier, so they are sent for colonoscopy and thus treated more effectively.

“Survival rates from bowel cancer are closely associated with the stage at diagnosis.  More than half of people with bowel cancer are diagnosed in the later stages, requiring more complex treatment, with a poorer chance of survival.  The aim of this new test is to find the cancer at the earliest possible stage, when it is easier to treat, improving outcomes for patients.”

The new test will be implemented on Randox’s proprietary Biochip Array Technology detection platform.  Randox Teoranta Managing Director, Dr Peter FitzGerald said: “The potential here is quite revolutionary, while bowel cancer is a very serious illness – early diagnosis leads to improved survival.  If bowel cancer is found early, the growth is typically small and can be removed, leaving the person healthy and needing less treatment.

“In addition bowel cancer places considerable burden on our healthcare system.  Stage 3 bowel cancer treatment costs are estimated at more than €45k per patient, with Stage 1 treatment €18,550 – less than half, if we can catch this cancer early and treat it early, then the economic benefit will be considerable.”

Dr Sinéad Walsh, Acting Head of Research at the Irish Cancer Society, which is the largest voluntary funder of cancer research in Ireland said: “We are very excited by the results of this research as it will help us move another step forward in our strategy towards a future without cancer.

“The earlier bowel cancer can be detected the better the outcome for patients.  This coupled with the ability to personalise treatments for bowel cancer patients, will contribute to better outcomes for people with bowel cancer.”

Dr. Conor Burke, Associate Director of the BDI commented: “This project is an excellent example of the translational research agenda of the BDI and its commitment to the realisation of commercial and societal impact through innovation in diagnostics.

“One of our primary goals is the creation of value for indigenous Irish diagnostics companies through our research and we look forward to working with Randox on realising the significant commercial and healthcare-related potential of this screening test.”

The collaboration is funded by Enterprise Ireland and Randox.  Initial work was supported by Science Foundation Ireland and carried out at Dublin City University and the Royal College of Surgeons Ireland and Beaumont Hospital. The inputs of Dr. Gregor Kijanka, Dr. Julie-Anne O’ Reilly, Dr. Barry Byrne and Professors Elaine Kay and Dermot Kenny were vital in developing this research.