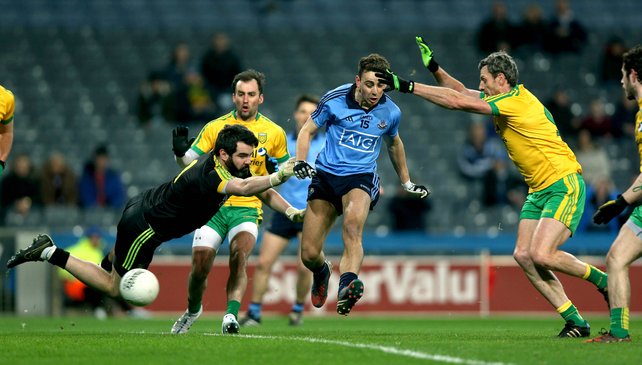 DONEGAL EDGED OUT BY DUBLIN IN CROKER LEAGUE CRACKER!

A pulsating National League encounter between Donegal and Dublin under the floodlights of Croke Park saw the men from the capital eventually pull away from their north-west rivals.

In a game which had everything from sendings-off, black cards, goals as well as some tremendous football, no quarter was given by either side.

If this was mundane league football, we’ll take it every weekend with the Dubs coming away winners on a final scoreline of 2-10 to 0-11.

Donegal were put on the back foot early on despite taking the lead.

Cormac Costlloe burst through on goal after a poor kick-out from Paul Durcan and blasted into the back of the Donegal net.

An outstretched Durcan injured himself and had to be replaced by Michael Boyle.

The Creeslough man did little wrong and could hardly have been blamed for Dublin’s second goal by sub Jack McCaffery late on.

In between Donegal had matched Dublin in every department with Michael Murphy, Christy Toye, Patrick McBrearty and Neil Gallagher all putting in big shifts.

Hits came in thick and fast throughout and at times it looked as if referee Deegan may lose control of the tie.

Dean Rock was as accurate as ever for Dublin notching up five points with four of these coming from frees while newcomer John Small was named Man of the Match at centre-back for the Sky Blues.

Dublin’s Kevin McManaman was sent for an early shower after a second yellow card early in the second half and it looked as if Donegal had been handed the advantage.

Rory Gallagher sensed an opportunity and drafted in Colm McFadden in a bid to shore up more scores.

But Gallagher’s side squandered six very kickable points from a collection of wides.

With just two points between the sides, McCaffrey managed to split the Donegal defence and shoot into the roof of the net past Boyle.

It was a killer blow for Donegal who were never going to pull five points back in what was a nip-and-tuck game throughout.

Michael Murphy was shown a black card with three minutes left on the watch but at that stage it was incidental.

Rory Gallagher should be pleased with his team’s overall effort but their accuracy in front of the posts will have to be worked on.

There’s a lot of water still to pass under the bridge before the championship begins, but these are two teams who look capable of having another big say in where the Sam Maguire could be heading come September.