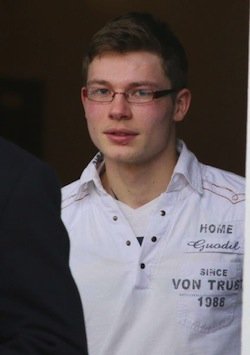 Two young men who gagged and bound a girl before robbing her have escaped a lengthy jail sentence after being given a taste of prison.

Lee McLaughlin was given a taste of prison. PIc by Northwest Newspix.

Lee McLaughlin, and James Leedham, were part of a three man gang who terrorised two young women in a house robbery in Carndonagh.

The men had pleaded guilty at Letterkenny Circuit Court to false imprisonment and aggravated burglary when they appeared on Monday last.

An angry Judge John O’Hagan deferred sentence until yesterday but had sent both men to Castlerea Prison to reflect on what they had done.

The court heard gang forced their way into the house at The Mullins in Carndonagh in broad daylight on September 29th, 2013.

The men had their faces hidden and had also brought an imitation firearm to the house.

Two young women in the house were watching television at around 1.45pm in the afternoon when the gang struck.

One of the women Shannon Doherty managed to escape through a window but another woman, Danielle Doherty, who was 20, was held captive by the raiders.

McLaughlin, 20, of Allendale Park, Carndonagh, tied Ms Doherty’s hands with a cable-tie and put duct tape on her mouth to stop her from screaming.

The gang tried to put her into a wardrobe but she refused to go into it.

They eventually stole 36 packets of cigarettes, 6 packets of loose tobacco and €58 in cash which they put into a rucksack which they had brought with them.

However the men were chased by some neighbours who had ben alerted to the robbery by Ms Doherty who had escaped earlier.

They managed to flee through fields but were eventually apprehended by Gardai.

The court heard the gang had planned the robbery after watching a video the previous night.

Victim Danielle Doherty said she was still suffering from the attack and had to lock all the doors in her house if she was home alone.

Leedham, 18, of Station Road, Buncrana, revealed he had been turned down for an application joining the army and was upset.

McLaughlin had suffered a vert tough childhood and his father abused him and his siblings including occasions when he would stub cigarettes out on them.

Judge O’Hagan said if he had sentenced the men last Monday, they would have been looking at a lengthy jail term.

“The deviousness which they did it with was quite frightening – the taping of the mouth, using cable ties, attempting to put her in the wardrobe – it’s like something you would see in the movies.

“I really do hope the four days they have had in Castlerea was a time of reflection and that they should not wish to be there again,” he said.

He sentenced both men to three years imprisonment but suspended the sentences for three years and ordered them to be of good behaviour.

MEN ESCAPE JAIL SENTENCE AFTER GETTING TASTE OF PRISON FOR ATTACK ON YOUNG WOMAN was last modified: February 7th, 2015 by Stephen Maguire