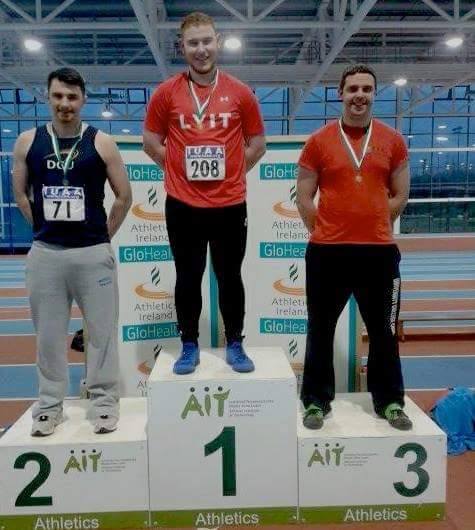 John Kelly, a student at LYIT has captured a gold medal at the Irish University indoor shot-putt title at Athlone IT.

Kelly also set a new Donegal record for the event getting out to a very respectable 15.83m.

The Finn Valley AC club man from St Johnstone has continued to improve year on year since his introduction to the sport at the annual school sports at Finn Valley as a primary school pupil.

He is only the 3rd Donegal athlete in history to hold the record as initially set by John Gallagher from Cruit Island a prominent athlete and Irish senior champion in the 40’s /50’s.

However, that record fell to Finn Vallleys Kieran Mc Connell 14.29m an Irish international at that time and now in the last 12 months it belongs to Kelly.

Next week hes in Glasgow for Scottish champs and ethen the following week its national senior in Athlone .