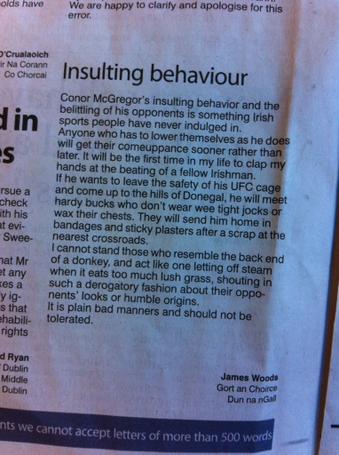 A disgruntled man has penned a letter to The Irish Examiner which challenges UFC superstar Conor McGregor to a fight at a crossroads in Donegal.

James Woods from Gortahork has become irritated and extremely annoyed by the behaviour of Conor McGregor.

Woods feels the way he belittles opponents is a disgrace and reflects Irish people in a negative light.

McGregor divides opinion and he’s certainly not everybody’s cup of tea, he’s like marmite you either love him or hate him.

Woods believes his behaviour is something Irish sports people have never indulged in and because of that he cannot endear himself to the Dublin MMA star.

In fact Woods says if McGregor gets defeated it will be the first time he’ll ever cheer and claps hands at the beating of a fellow Irishman.

Woods challenges McGregor to leave the comfort of his UFC cage and come up to the hills of Donegal and fight ‘hardy bucks’ who don’t wax their chests or wear tight wee jocks.

McGregor will fight for the world title against Jose Aldo in Las Vegas in July.

But who knows he may well take Woods up on his offer and fight a Donegal man at a crossroads in Gortahork.

With Errigal in the background it would make a scenic location for a fight and is far removed from the bright lights of Las Vegas.

One thing’s for sure if it did happen it would be box office entertainment!