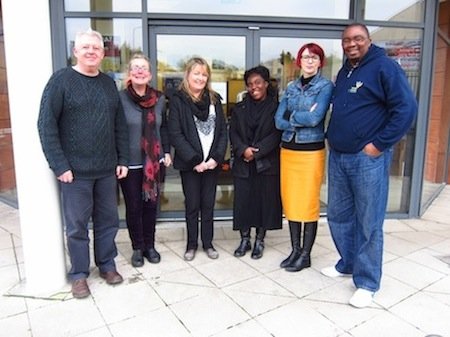 A new drop-in service where everyone will be welcomed by a cup of tea, a chat, and assistance with any issues that they may be having with housing, social welfare, education, and more has opened in Letterkenny.

The Donegal Intercultural Platform works for equality, empowerment, and justice for minority communities in the county and hopes to develop the Friday drop-in service as a real benefit for all of the communities in Letterkenny.

The drop-in will be open on Fridays, starting on 13th February, from 2 to 5 p.m. at Port House on the Port Road in the ground-floor office formerly occupied by the Port na Fáilte Intercultural Resource Centre and now home to Donegal Travellers Project (DTP).

“On Friday afternoons Donegal Travellers Project have made their reception area available from 2 p.m., so the drop-in will be open from then to 5 as a place where everyone can be sure of a warm welcome and support with any issues they might have in areas such as housing, welfare, and employment,” said Platform Co-Chair Paul Kernan. “We might not be able to solve the problem, but we will be able to put them in contact with someone who can.”

Platform Co-Chair Billy Banda said the new drop-in will provide a base for responding to the numerous requests for assistance with housing issues that he receives from members of minority ethnic communities.

“I spent the last two days helping someone from the African community who’s being evicted to get themselves new housing,” said Billy, a candidate in the recent local elections who is originally from South Africa.

“The Platform’s drop-in service will be a place where people can get a welcome, a listening ear, and help with issues that need resolution. We are well placed to know who can help and how to help.”

Donegal Intercultural Platform was founded in 2010 as a group which advocates on behalf of minority ethnic and cultural groups in Donegal through promotion of understanding and respect among all of the different communities in the county. The Platform has links with regional and national organisations, including the Migrant Rights Centre and ENAR Ireland, and campaigns for social progress and against racism, sectarianism, and exploitation.

The new drop-in service builds on the experience that Platform members have gained over the past five years in promoting inclusion, assisting with intercultural training programmes delivered by DTP, and producing community celebration events and youth and community projects.

Platform member Georgina Aduboahene, who is originally from Ghana, said the drop-in will be a place where members of minority ethnic communities are able to share strategies for addressing some of the social and cultural challenges that they experience in Ireland.

“Kids suffer more when they move to a different country and a different culture,” she said. “The way we were brought up back home is different from the way it is here. At school our kids see teenagers doing things that they want to do too, but their parents are expecting them to live like they’re back home. That’s how kids experience conflict and confusion.”

Ms. Aduboahene is currently working on a report for the Platform which is based on responses to a survey that asked members of minority ethnic communities about their experiences of life in Donegal. In the coming months the Platform, which has a Facebook page, is planning to begin publishing a newsletter.