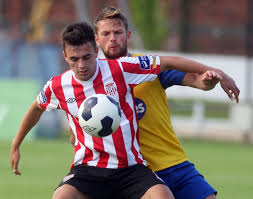 DONEGAL SOCCER STAR CALLED INTO REPUBLIC OF IRELAND U21 SQUAD

Former Buncrana Hearts FC underage starlet and current Derry City winger Mark Timlin has been called up by the Republic of Ireland U21 manager Noel King.

Timlin impressed towards the end of last season and endeared himself to the Derry City faithful with some electric displays.

He earned a new contract as a result and is expected to play a starring role for Peter Hutton’s side this term.

Republic of Ireland U21 manager Noel King named Timlin in his squad for their friendly match against the Irish Amateur International side at the AUL Complex in Dublin.

The match will take place on the 21st of February and Timlin will be hoping to impress.