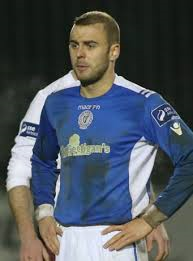 Finn Harps could welcome Damien McNulty back into their side for tonight’s pre-season friendly with Galway United at Terryland Park.

The former Limavady United and Coleraine defender is regarded as one of the best players in the league and his return will be a welcome boost to Finn Harps manager Ollie Horgan.

McNulty had surgery on a shoulder problem at the end of last season and has been undergoing rehab since.

It’s expected he’ll play some part tonight, with an appearance from the bench most likely.

Tony McNamee will also return to the Harps XI after he missed Tuesday night’s friendly win over an Inishowen League Select side.

The game will come too early for Harps centre-half Packie Mailey.

He’s continuing his intense rehab programme with physio Michael McGlynn but is expected to be fit for the start off the season which kicks-off next month at Tolka Park.

MCNULTY EXPECTED TO RETURN AS HARPS HEAD TO GALWAY FOR PRE-SEASON FRIENDLY was last modified: February 13th, 2015 by Mark Forker