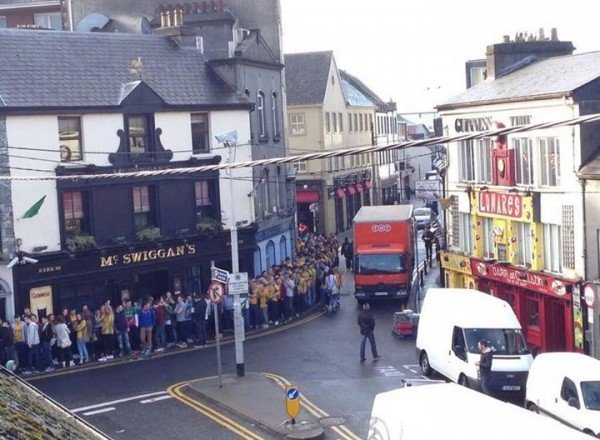 Hundreds of students queue outside The Hole in the Wall bar in Galway for ‘Donegal Tuesday.’

A chief executive for a leading Irish charity has launched a stinging tirade regarding the Donegal Tuesday RAG week event currently being enjoyed by students in Galway.

Barnardos chief executive Fergus Finlay who is also involved with (Stop Out Of Control Drinking) slammed the event, and said Ireland has an unhealthy relationship with alcohol.

The annual event which takes place every RAG week has again grabbed national attention after hundreds of students starting queuing since 8am this morning to gain entry to the event.

Some students queued for up to THREE hours to get into The Hole in the Wall pub in Galway for the ‘Donegal Tuesday’ event.

The boozy session is expected to last all day, and Gardaí have had to employ an operational plan to help steward the event which has provoked outrage across media platforms today.

Finlay phoned into the Joe Duffy show on RTE and disclosed his fears about the event, in which he indicated that people were going to get hurt.

Finlay said, “One of the things we [Stop Out of Control Drinking] wanted to do to be honest was try to hold up a mirror to that deeply unhealthy relationship with drink in Ireland.

“I don’t know if you can hold up a better mirror,” he said.

“People queuing up to get into a bar and drinking at 8am in the morning, it’s just ridiculous.

“Some people are going to live with the consequences of a riotous day for months and perhaps for years to come.

“It’s all track-able I think to this idea that we have in Ireland that if there’s drink on offer, we’re going to be the first in the queue.

“People are really going to get hurt before this day is out,” he said.