NO BUTTS – THE GLASS MENAGERIE IS A TREAT FOR DRAMA FANS 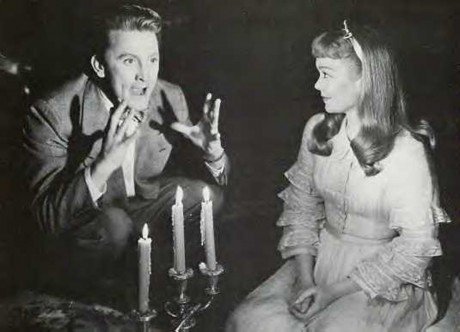 A scene from the original Glass Menagerie starring Kirk Douglas

THE Butt Drama Circle presents its 2015 festival play ‘The Glass Menagerie’ in Ballybofey this week.

Abandoned by her husband, Amanda Wingfield comforts herself with recollections of her earlier, more gracious life in Blue Mountain when she was pursued by gentleman callers.

Her son Tom, a poet with a job in a warehouse longs for adventure and escape from his mother’s suffocating embrace, while Laura, her shy crippled daughter, has her glass menagerie and her memories.

Amanda is desperate to find her daughter a husband, but when the long awaiting gentleman caller does arrive, Laura’s romantic illusions are crushed.

The Glass Menagerie, Tennessee William’s evocation of loneliness and lost love is one of his more powerful and moving plays and a classic of American theatre.

The cast includes Kathleen McGowan as Amanda, Shaun Byrne as her son Tom, Orlaith Gilcrest as her daughter Laura and Cronan Scanlon as the Gentleman Caller.

The Glass Menagerie will be staged in the Balor Arts Centre, Ballybofey from today, Tuesday 24th to Thursday, February 26th at 8pm nightly.

NO BUTTS – THE GLASS MENAGERIE IS A TREAT FOR DRAMA FANS was last modified: February 24th, 2015 by Stephen Maguire