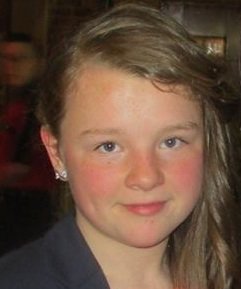 Hundreds of people are expected to to turn out for the funeral of tragic Georgia Doherty (Sadler) which takes place this Thursday.

Tragic Georgia will be buried on Thursday

The 13 year old from Clar in Redcastle will be buried following funeral mass at St. Columba’s Church in Drung.

The sports-mad teenager was killed instantly when she was involved in a traffic accident in Co Derry on Sunday afternoon.

Her older sister Lisa McCole, who was driving the car, has been in hospital since the horrific crash which happened around 5pm.

The pair had been returning from enjoying a day out in Belfast when the accident happened.

Pupils from Moville Community College, where Georgina was a first year pupil, as well as from Redcastle FC where Georgina played football, will attend the funeral.

Her heartbroken family issued a statement in which they paid tribute to Georgia and all she had achieved during her short life.

“In her short life Georgia touched many people as she was a vivacious, bright, loving and caring girl whose loss will be greatly mourned by all those who came to know her.

“She was our ‘happy go lucky superstar’ and this is how she will be remembered.”

Georgia, who was the youngest in a family of four siblings, is survived by her parents George and Rosemarie, sisters Lisa, Caira and only brother Connaire.

TRAGIC GEORGIA TO BE BURIED THIS THURSDAY AS SISTER REMAINS ‘STABLE’ IN HOSPITAL was last modified: February 25th, 2015 by Stephen Maguire