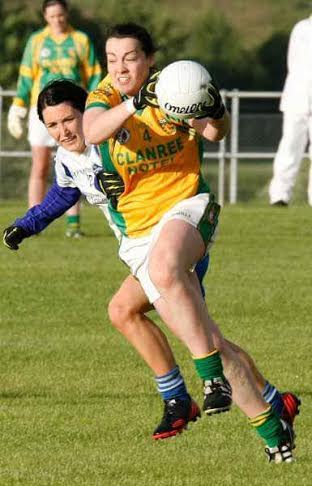 SHE laughs when you mention her big sister Geraldine, but Nicole McLaughlin is a classy footballer in her own right.

And when it comes to entertainment, the Termon defender says there’s nothing better than ladies football….a view many people are slowly beginning to realise.

Donegal take on Kildare in their Tesco Homegrown Division 2 clash in Milford this Sunday (throw-in 1pm).

And Nicole McLaughlin is hoping she and her team mates can make it four wins out of four in this campaign.

“I’m her shadow,” laughs Nicole when asked about being a sister of Geraldine, but somehow you suspect she doesn’t mind that one bit.

“I’m really enjoying playing with Donegal this year. The set-up is so professional and that has bonded the team even more closely together.

“We’re in a good place now. We have three wins in a row, and that win over Armagh was so important for us. When you consider we lost ten games in a row, getting into a winning run has been a massive boost.

“We believe we’re good enough to compete in Division One to be honest but being in Division Two is giving us some time to build again.

“Armagh was a tough game and we expect Kildare will be just as tough this Sunday but we are still taking it all game by game.

“We’re in Milford on Sunday and I do hope people come out and support us. Ladies football has improved so much and it is a much more entertaining game than men’s football has become with packed defences and every team doing the same thing.”

Nicole, an all-Ireland club title winner with Termon, is studying to be a secondary school teacher at St Patrick’s College in Thurles.

The corner back packs in gym work between training sessions with the college team.

“It is hard to train when you’re on your own but you do it because you’re doing it for the right reason,” said the 20-year-old.

Donegal v Kildare at Milford at 1pm on Sunday.

‘LADIES FOOTBALL IS MUCH MORE ENTERTAINING AND I HOPE THE PEOPLE OF DONEGAL SUPPORT US’ – NICOLE was last modified: February 27th, 2015 by John2