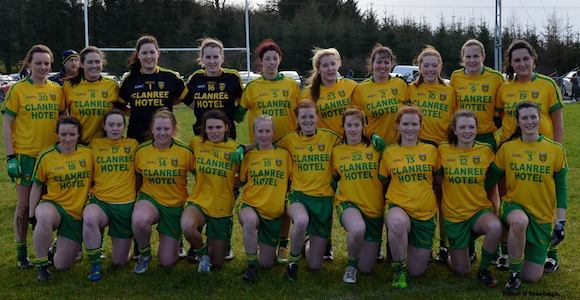 DONEGAL’S Senior Ladies made it four wins from four with a super win over Kildare today.

It was a particularly special day for Amber Barrett in the match played at her home club in Milford.

Donegal had led by just six points at the break after a late Kildare goal just before the whistle.

But there was to be little cheer in the snow – and the sunshine – for the visitors as Donegal’s lovely passing game saw they rip the Kildare defence apart again and again.

So by the time Amber hit the back of the net for the third time, her punch to the air was more in celebration of a great day out at her home club than anything else.

Eilish Ward and Niamh Heraghty were the other goalscorers on a day when everyone on the team shone, Nicole McLaughlin superb in defence, Shannon McGroddy seemed to be almost everywhere and Roisin Curran’s vision and passing a joy to behold.