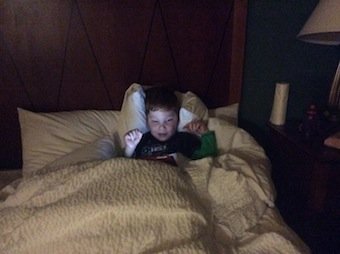 A little Co Donegal boy is getting ready to have a make-or-break pioneering operation to help him walk for the first time.

Paul gets a good night’s sleep in America ahead of his operation.

Little Paul Doherty, 5, will have surgery on Tuesday in the US to help him walk for the very first time.

Paul a born with spastic quadriplegic cerebral palsy which left him in a wheelchair.

But his mother Ann-Marie never gave up hope of him walking one day.

While the operation does not guarantee the five year old Killygordon lad will take his first steps, his mum is determined he gets a chance.

Paul and his family arrived in St Louis, Missouri at the weekend in a snowstorm but nothing was going to stop the family from giving Paul the chance to walk.

The American public have really taken to Paul and his bright red hair and now he has even asked his mum if he can have some hair gel.

Anne Marie even managed to meet with another Irish family who had the same operation three weeks ago.

The Doherty family have a pre-operation appointment tomorrow to see if all systems are go for the major operation.

Anne Marie previously told Donegal Daily “Since Paul could talk he always told me “Mammy, I want to walk”. It broke my heart to see him stuck in a wheelchair not been able to run about with his brother and sister or even to be able to pick up a toy from the floor that he wanted to play with.

“Then I came across an operation in America called Selective Dorsal Rhizotomy (SDR). The operation involves cutting some of the nerves in Paul’s spinal cord that are misfiring the muscles in his leg.”

The people of his native Donegal really got behind Paul’s fundraising campaign and even more is needed now after the operation for an intense 2 year post operative physiotherapy program.

Even singer Daniel O’Donnell interrupted his Christmas holidays to put on a special fundraising concert after hearing of Paul’s plight.

Anne-Marie said she is really nervous for her son but knows that he’s a battler.

“He has been through a lot in his young life but he always has a smile on his face. We are due a pre-appointment with the hospital and we are just praying the everything goes okay.

“We’ve come a long way and we couldn’t have got here without the help and support of the people of Donegal and across Ireland,” said Anne Marie.

BRAVE PAUL GETS READY FOR THE FIGHT OF HIS LIFE AS OPERATION DRAWS CLOSER was last modified: March 1st, 2015 by Stephen Maguire
Facebook0Tweet0LinkedIn0Print0
Tags:
donegaloperationpaul dohertyUSWALK