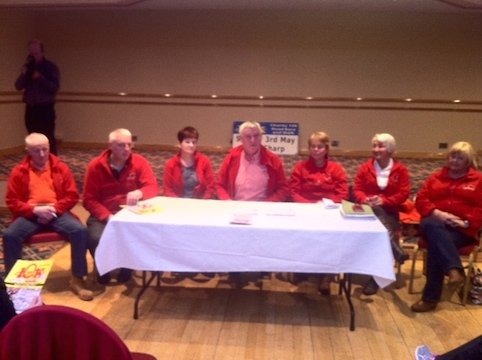 The North West 10K committee make the announcements of their charities.

The 19th North West 10k was launched in the Mount Errigal Hotel tonight where the four benefiting charities from this year’s event were announced by the organising committee.

The benefiting charities this year are the Multiple Sclerosis Society, Donegal Down Syndrome Association, Blood Bike North West and the Donegal Youth Service.

The event has brought in nearly €700,000 for 30 charities since 1997 and that fundraising drive will continue on Sunday, May 3rd in Letterkenny.

Organisers are hoping that around 3,000 people will gather at the Community Centre for the hugely successful charity event.

Chairperson James Boyle said the 10k organization was delighted to again have the same sponsors on board Brian McCormick Sports and Leisure and Donegal Daily.Com.

Over 20 organisations expressed an interest initially in being one of the main charities this year.

Mr Boyle thanked everyone for their help in making the 10K the huge success it has become.

In particular he thanked the Gardai for their co-operation on the day and running up to the event.

Members of the four charities chosen to benefit outlined the work of their groups and expressed their thanks for being chosen by the North West 10K committee.

The charity race and walk takes place on Sunday, May 3rd in Letterkenny starting at 2pm. For further details visit the website at www.northwest10k.com.