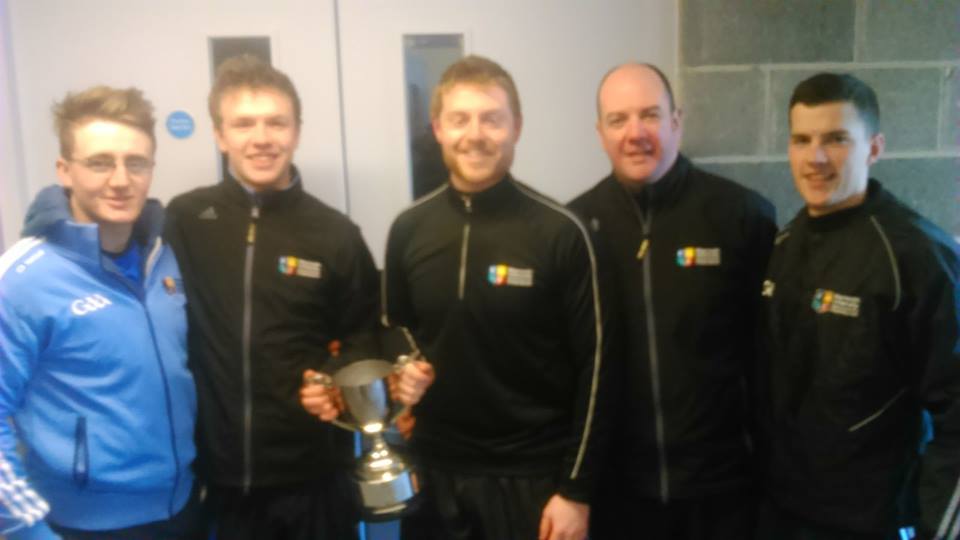 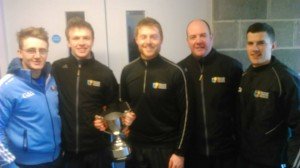 The Club launched our annual Easter Draw at the Health & Wellbeing Day on Saturday week with Fr Adrian Gavigan doing the honour of buying the first ticket.

Our Seniors have been drawn in Group 2 for this years Intermediate Championship alongside, Bundoran, Naomh Brid and Burt. Fixture dates have yet to be announced however it has been announced that the Senior will play at home to Bundoran and Naomh Brid and away to Burt.

The Club will be hosting its new ‘Bootroom’ project in the coming weeks which will provide a swap/shop for outgrown/unwanted football boots. If you find your growing children are going through football boots at a rate of knots this could be perfect for you. Parents will be able to donate any unused football that are in reasonable condition to the clubhouse in the coming month and all boots will then be put on display for sale at a date to be announced. All proceeds go back to the original boot owners however there will be a fixed price per pair of boots. More details to follow in the coming weeks.

The league opener ended in defeat for the Minors on Saturday as they were defeated 0-8 to 2-11 at home to St Michaels. Goals either side of the break sucked the wind from Na Galloglaigh sails as prior to that they had been excellent. The blues went 2 nil down in the first 5 minutes but responded brilliantly to find themselves 0-5 to 0-4 ahead after 25 minutes. A nasty injury to St Michaels player Michael McFadden caused a long break in play and after which the lads didn’t recover the intensity they had been playing with before. All at the Club wish Michael a speedy recovery from a nasty looking injury. Disaster struck in the closing stages of the half as Gavin Grier had no option but to haul down a St Michaels forward inside the box as he was through on goal. Gavin received a black card for his trouble and the penalty was dispatched, and quickly followed by a point, to leave the half time score 0-5 to 1-5 for the Dunfanaghy men. A second hammer blow came 2 minutes into the second half when St Michaels got their second goal and they soon found themselves 7 points ahead. Na Galloglaigh heads seemed to go down at this point as the scoreline didn’t reflect the balance of play. A 7 point deficit, as well as playing into a breeze that got stronger as the half went on meant it was always going to be a huge task to claw this game back. But credit to the lads, they stuck to it and persevered right until the final whistle, even though they didn’t get the rub of the green today. St Michaels were cute and brought bodies back to clog up the scoring zone and make life difficult for Na Galloglaigh, while breaking in numbers to add scores that kept the blues at arms length. Na Galloglaigh will probably be most disappointed with the fact that 9 of St Michaels 11 points came from frees, and also the concession of a penalty. More discipline in the tackle and this could have been a different game. As it is there are still plenty of positives to be taken from this outing, and with the potential within this team (which had a very strong bench and a panel of 26) you always got the feeling that when this group of players clicks together as a team they will be a match for anybody. Next up for the Minors is another home game against Gaoth Dobhair, on Sunday 8th at 11am. Team: Gavin McFadden, Derek Edwards, Kieran Sheridan, Patrick Ferry, Ryan Mcmahon (0-1), Gavin Grier, Ronan Docherty, Luke Trearty, Adam Serrinha, Ryan Spike Flood, Connor Gormley (0-3), Odhrán Coll, Cormac Toland, Kane Barrett (0-4), Martin Doyle. Subs: Hayden Curran for Grier (29m), Andreas Afxentiou for Ferry (44m), Conor Mc Hugh for Spike (44m), Paddy Mc Carron for Coll (58m). Peter Curran, Niall Trearty, Paul Johnston, James McCahill, Shane McNamee, Kyle Macaulay, Jamie-Lee Blaney

Well done to the Donegal Ladies who were simply superb on Sunday as they swept aside Kildare in Moyle Park by 5-19 to 1-2. Great day for the Club to have a game of this stature in our own backyard and even more so as we got to see Amber Barrett run riot in the county colours on her own pitch scoring 3-4 in a great display. Donegal were magnificent all over the pitch and could have been further than 1-7 to 1-2 ahead at half time. In the second half they were on fire and scoring superb points for fun, while being rock solid at the back keeping Kildare scoreless for the entire second half. Sunday makes 4 wins from 4 for Donegal to put them in second place behind Cavan on points difference. Next up for the Ladies is another home game, this time against Meath, on Sunday 15th March.

Congratulations to Luke Barrett who managed NUI Maynooth to All Ireland Freshers glory last week when his side defeated Athlone IT 0-9 to 0-5. Luke seems to be following in his fathers footsteps to managing his side to victory in his first year in charge. Club physio Conall McFadden was also on the sideline for Maynooth. Well done Luke and Conall from all at the Club.

Gaelic 4 Mothers & Others resumes training next Monday, 9th March at 8.15pm. Open to all newcomers and past players who are over 18 and not currently playing competitive football. These trainings are fun orientated with the focus on learning the skills of the game and interacting with other women/mothers in the community and providing opportunity to be physically active.

The Senior Ladies are once again Division 1 this year with Carndonagh, Glenfin, Moville, St Eunans and Termon.

Fixtures have been released for the upcoming U16 season and our lads have been drawn in Group 3 along with Gaoth Dobhair, Cloughaneely, St Michaels, Fanad gaels, and St Eunans A.

For any of our members or supporters who clock up a lot of miles Topaz have a ‘Cash for Clubs’ scheme. Collect a card at your local Topaz and each time you top up by €40 get it stamped. When you have your card completed hold on to them and hand them to Barry McNulty to be entered into the draw.

Nicky Boucher knows his GAA and has shown it this week to take top spot ahead of Ballybodens David Curley. Ryan Ferry has proved he knows something after all to move into 3rd spot, while Michael O’Hara was top scorer this week with 255 points goes 4th, and Dean Boyce rounds off the top 5, just a point behind Mick.

The Club would like to extend its sympathies to the Gallagher family of Ballyare on the death of Jennie Gallagher recently. Jennie is mother to Ladies team mentor Louis Gallagher and grandmother of Senior goalkeeper Sean Gallagher, and Senior Ladies players Denise and Aoife Gallagher. May she rest in peace.

With 1 month to go we currently have 172 codes, enough for some equipment but a long way short of some of the better stuff so we need more collectors! If you see a Lucozade Sports bottle lying around keep it and enter the code as we have a prize for the top collector, currently Richard Evesson is leading the collector list. To enter any codes you may have follow the instructions below:

3. To find your team search for ‘CLG Baile na nGalloglach’

4. Enter the code that is printed on the bottle, it is underneath the wrapper

So far we have enough for 3 sets of cones, however the next target is water bottles (185 codes)

The 2015 membership rates were decided at Decembers AGM and are as follows:

€200 – Database members (3 panels on weekly lotto). Entitled to 2 full adults and juvenile membership for all children up to 18yrs.

€100 – Database members (1 panel on weekly lotto). Entitled to 2 full adults and juvenile membership for all children up to 18yrs.

€70 – Family Membership. Entitled to 2 full adult membership and juvenile membership for all children up to 18yrs.

As well as full family membership database members are:

– Entered into every draw every week

Membership must be paid by St Patricks Day, 17th March 2015. The Club will only be able to source Donegal tickets for fully paid up members. Membership can be paid to any team manager or member of the Executive Committee, or very easily through our Team App on your mobile phone. This extremely useful app (Team App) can be downloaded from the app store. Complete your registration on download and search for CLG BnaG. Membership can be paid via the ‘Shop/Play Lotto’ option.

This weeks lotto numbers were 1-3-4-9. No jackpot winner, 4 match 3 winners win €20 each. Eunan Gormley, Ramelton, Cathal McHugh, Philadelphia, Emma Black, Aughanursan, and Laurence McAllister. Next weeks Jackpot is €920. Don’t forget you can enter the lotto from the comfort of your own home by playing through our own FREE Club App. Usual rules apply, pick 4 numbers per box, €2 and €5 options available. Numbers must be entered before 10pm or else they roll over to the next week. Perfect way for our many supporters and exiles overseas who would like to continue to support their Club.

A selection of club gear is available to order. Photos and prices of these items are on the club website and on the new Team App. Orders can be placed with Agnes Ryan 0868194751