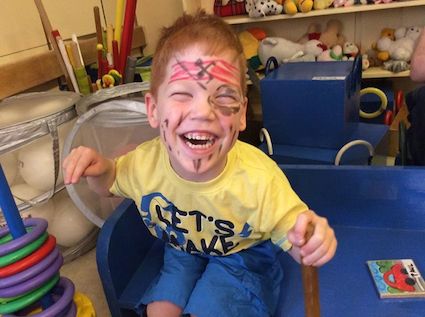 JELLY AND ICE-CREAM AND A TOY TRACTOR – PAUL IS ON THE MEND!

Little battler Paul Doherty is making a rapid recovery after his operation to help him to walk.

The Killygordon lad, who underwent the pioneering surgery in Missouri in America on Monday, has had his ups and downs after the operation.

But mum Anne-Marie said she knows her 5 year old is on the mend after he demolished a bowl of jelly and ice-cream!

Anne-Marie revealed “Paul had a rough night last night…. He was quite sick all through the night and a little upset. He was not in any pain but he was on a lot of medication and these were making him sick.

“The pain management team gave him a little extra stuff and he fell asleep. This did the trick and he ate a cracker and drank some sprite at 10am. Slept again till 1pm and them woke up looking for his dinner !! He had a cheese wrap, jelly and ice cream. He ate the lot.”

Paul’s surgeon, Dr Park, has visited the Donegal lad and said he was happy with everything.

He confirmed that Paul’s second operation will be on Tuesday next – the day after Paul’s birthday!

Anne-Marie added “That means that Paul gets discharged on Sunday, pre-op appointment on Monday and admitted again on Tuesday. The good thing is that Paul will be 6 on Monday and he won’t be in hospital and it’s only for one night this time when he does go back in.”

Volunteers from the hospital have been to see Paul checking to see if he has any requests for toys, books or games.

“I know Paul is feeling a bit better when he asked them for a tractor,” said mum Anne-Marie.

All going to plan, Paul and his family hope to be back in Donegal by March 28th.

JELLY AND ICE-CREAM AND A TOY TRACTOR – PAUL IS ON THE MEND! was last modified: March 5th, 2015 by Stephen Maguire