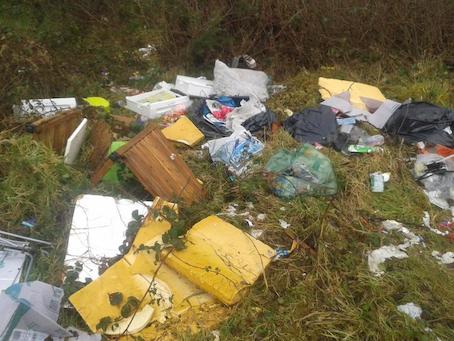 Some of the illegal rubbish dump din the Doneyloop area.

Animal carcasses have been amongst the waste dumped at an illegal dumpsite in Doneyloop in the Donegal countryside.

The latest illegal dumpsite was discovered by walkers in the Drumbane/Fernhill area yesterday morning.

The illegal dumpsite included everything from household waste to televisions.

Officers are going through the rubbish to find its source.

A local spokesman who contacted Donegal Daily about the dump said animal carcasses were recently dumped in the same area and simply allowed to rot away.

Locals yesterday contacted the Environmental section of Donegal County Council to alert them of the dumping.

Litter officers were due to go through the waste in a bid to discover where exactly it came from.

A local resident’s spokesman said “This is totally unacceptable for our beautiful area and must be highlighted.”