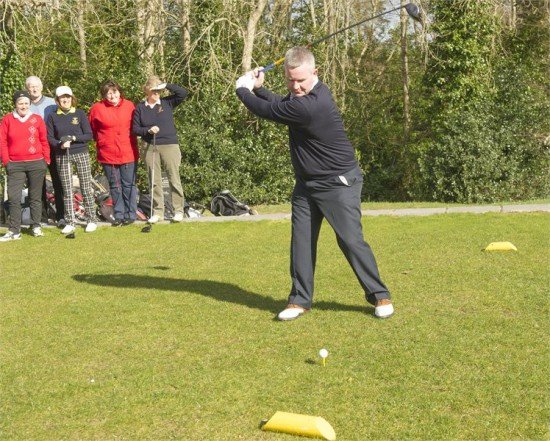 GOLF NEWS: KENNY IS THE ‘KING’ AT BARNHILL

There is an old saying that “only mad dogs & Englishmen…………”. Well, what we Irish call any golfers who went out to play in Saturday’s atrocious, storm related gales and rain is “Bravehearts!” That’s what the dedicated golfers who played in Barnhill’s Open competition deserved to be called for, apart from their own rustiness caused by the recent weather related lay-off, the gale force wind on some of the fairways and greens made it an endurance test likened to the “Iron Man” contest.

Showing the rest of the men the way forward as any “King” would do was our own Kenny King [7], who, despite a bogey at first, kept the head down and battled to a very competent 19pts on outward nine. Little did Kenny realize that his back nine in such atrocious weather was to be an example to all golfers this season for he made just one blemish to the scorecard on that inward nine, a double bogey at 14th, for a gross return 77 and a total of 38pts stableford. In runner-up spot was competitions secretary Danny Mc Laughlin [13], beating Ciaran Clerkin [22] on B.O.T.

Remember the song “What a difference a day makes?” That’s what the collective anthem was on Sunday 8th at Letterkenny Golf Club! Having been postponed previously on two occasions due to the Captain’s uncanny intuition of bad weather, the long awaited Captains’ Drive-In teed off without a hitch and what a glorious start to the 2015 golfing season it was. With over one hundred members turning out to wish them every success, it was the history making Anne Condon, the first Lady President of Letterkenny Golf Club, who had the honour of striking the ball in her first “official” engagement of the year. Having been led down the pathway to the first tee by one of Letterkenny Town’s finest “pipers”, Aisling Moore, it was the turn of Lady Captain Margo Birmingham and club Captain Gerard Duffy to show the watching gallery how it was done and, “driving” accordingly to a standing ovation and a rousing rendition of tunes from the bagpipes, the duo duly obliged and planted their golf balls firmly in the middle of the first fairway! With the sunshine now at a premium and the temperature rising, congratulations to the winning team of Mary Gallagher, Michael Collum and team captain Victor Byrne, returning an unbeatable score of 61.4. In runner-up spot, with two former club captain’s in the team were Eleanor O’Carroll, Danny Mc Laughlin and Tom Mc Donagh with 62.0 and in third place were Charlie Mc Hugh, Clifford Malone and the “big easy”, Mark Cohen with 64.0.

You need to have your GUI/ILGU handicap card with details for registering.

It’s that time of year again! All members are asked to forward membership subscriptions asap. Subs must be paid before St. Patrick’s Day Open.

WE NEED YOUR OLD MOBILE PHONES—- to get a second defibrillator that will be housed on the course, making it more accessible should something occur during play on the front 11 holes. There is a box provided in the club foyer for all of your old unwanted mobile phones—-please donate NOW!!

Letterkenny Golf Club’s Online Lotto’s draw took place on Wednesday 4th March and, although there was no JACKPOT winner of €1,850, two lotto members who smiled happily were Ellen Mc Nulty and Mairead Ní Dhugan, winners of the “lucky dip” prizes of €50 each. Congratulations to you both! Numbers drawn were 6; 8; 9; 18; The Lotto draw takes place every Wednesday evening, closing time for entries is 6pm Wednesday, and entry page can be found on club website, www.letterkennygolfclub.com and follow the prompts. Join from as little as €20! [€2 per week] Thank you for playing and please continue to encourage your fellow members, friends & family to play our Club Lotto.