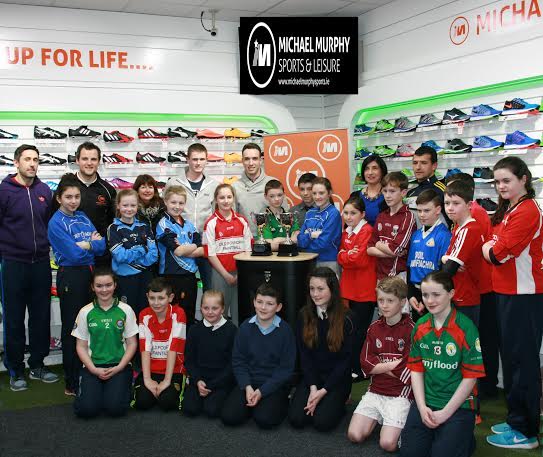 COUNTY stars are getting behind a Letterkenny and District schools gaelic football league for girls and boys which starts next month.

Teachers Frank McGlynn and Rory Kavanagh were on hand for the announcement at Michael Murphy Sports last night of the start of the competition.

Michael’s sports shop is sponsoring the event which will see 16 teams from a dozen schools across the area taking part.

The competition is being supported by St Eunan’s, Glenswilly and Letterkenny Gaels.

The schools will take part in several days of football, competing on finals day for two wonderful trophies –  the Susan Carr Cup for Girls and Elaine Winston Friel Cup for Boys.

Games will take place at O’Donnell Park and Glenswilly and begin on April 15.

Organisers want to thank the clubs and the schools for their support in this development initiative and Michael Murphy Sports who are sponsoring the tournament and medals for the players.

Children from National Schools who are taking part in the competition are pictured with members of the Winston and Carr families as well as Michael, Rory & Frank.

COUNTY PLAYERS GET BEHIND STARS OF THE FUTURE IN SCHOOL GAELIC FOOTBALL LEAGUE was last modified: March 13th, 2015 by John2