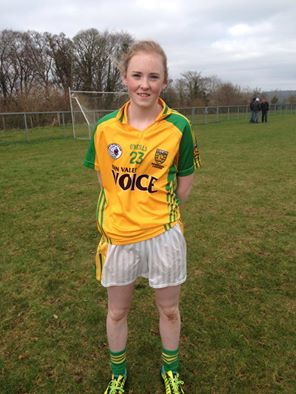 Eimear Gallagher starred for Donegal U16 girls in their victory over Down.

The men’s preparation for the season ahead continues this week with training on Thursday at 7.30pm Then on Sunday they travel to Castlederg for another friendly with throw in at 10am.

Their first league game is on Saturday 28th of March with an away fixture V Burt. Reserves throw in at 2.30 and Seniors throwing in at 4pm

The minors suffered their first defeat of the season at the hands of a much stronger St Eunan’s side in O Donnell Park On Saturday morning. The lads competed well with the Letterkenny lads for long periods in the game. They can take a lot of positives from the game and learn from them.

Their next game is at home to Glenfin on the 31st of March.

Players to bring €2 once a week for training fund.

Players to bring €2 once a week for training fund.

Red Hughs underage training on Saturday mornings from 11am to12noon. This will be for all boys and girls from u6s up to u10s and u12 boys. This year we will be collecting €2 per child and no more than €5 per family for the use of the facilities to train. This money will go straight back into the underage training funds.

Any parent/guardian that may be willing to help out on Saturday mornings please don’t hesitate to contact any of the coaches on the morning of the training.

The was no winning sequence

This weeks winner of the 100+ club

to everyone for your continued support.

The Ceile dancing resumes next Tuesday the 24th of March at 8pm in the club house . Everyone welcome

This Friday the 20th is your last chance to become a member of Red Hughs GAA for 2015. The club house will be open form 8-9pm for anyone wishing to pay their membership. No membership will be accepted after This Friday. The fee is €30 per adult €50 for married couples or partners. €10 for under 18’s

Well done to Eimear and the rest of the Donegal Under 16 girls on a great win against Down on Sunday. Eimear got on for the last 15 minutes and got involved in the game right away. She also scored a great goal. Well done Eimear. The final score was Donegal 5-7 Down 0-2 Their next game is at home to Tyrone on the 29th of March venue tbc