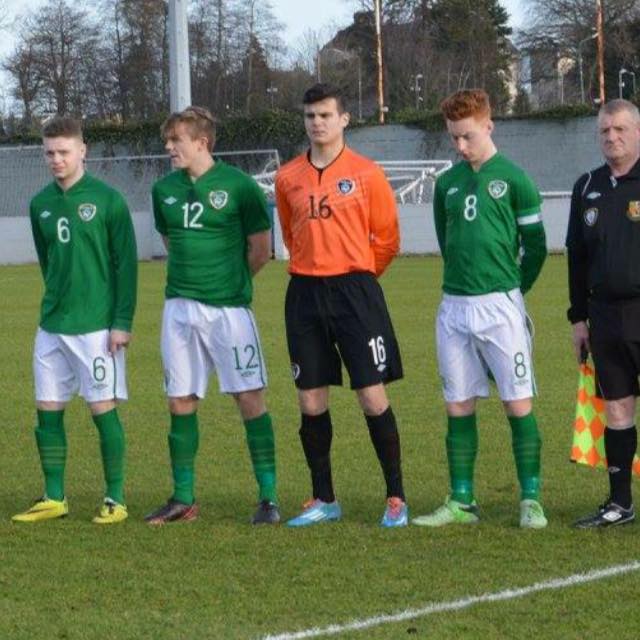 MCCARRON STARS FOR IRISH SCHOOLBOYS SIDE IN VICTORY OVER NORTHERN IRELAND

Lee McCarron starred for the Republic of Ireland schoolboys side in their 3-2 win over Northern Ireland.

Finn Harps keeper Lee McCarron pulled off some crucial saves to ensure the Republic of Ireland schools side got a St Patrick’s Day win over neighbours Northern Ireland this afternoon.

McCarron played the entire match and produced some top-class stops as Ireland earned a vital victory in the International series.

The game was played in perfect conditions on a fantastic playing surface at Ferney Park home of Northern Ireland Premiership side Ballinamallard United.

The Republic of Ireland schoolboys side had a strong Donegal and Finn Harps connection within its squad.

Finn Harps manager Ollie Horgan is the assistant manger while Harps coach Willie O’Connor is also on the backroom team while Mickey McGlynn is the team physio.

Ireland raced into a two-goal half-time lead thanks to goals from Aaron Robinson and Conor Ellis.

Northern Ireland hit back early in the second-half before Ellis got his second and Ireland’s third.

Northern Ireland scored from the penalty spot late on but Ireland held on for a crucial win.

They now face Wales in their next match in the competition.

MCCARRON STARS FOR IRISH SCHOOLBOYS SIDE IN VICTORY OVER NORTHERN IRELAND was last modified: March 17th, 2015 by Mark Forker