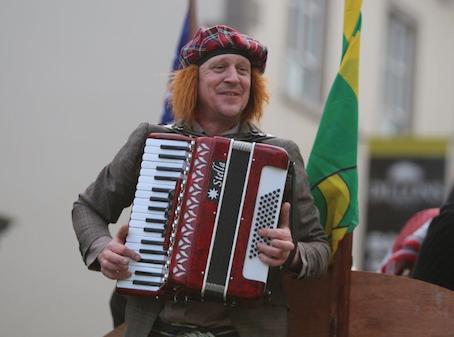 Brian Kelly on the float of the Letterkenny Reunion. Pic by Northwest Newspix.

Thousands of people across Donegal have celebrated St.Patrick’s Day – most in glorious spring sunshine.

Gardai have not reported any major incidents as parades were staged across many towns and villages.

There were parades in almost every corner of the county including Buncrana, Kilcar, Ballybofey, Carrigart, Moville, Letterkenny, Dungloe, Donegal Town and many more in between.

Thousands of people took advantage of stunning spring sunshine to make the Letterkenny Parade one of the most memorable for many years.

Floats and features with everything from miniature ponies to vintage cars made their way down the town’s Main Street.

Among the dignitaries invited to observe the parade was Dr.Philip Boyce, Bishop of Raphoe.

The parade was led by the local Reserve Defence Force who took the salute from Commandant Donal McCafferty.

Toni Forrestor, CEO of the Letterkenny Chamber, said the parade was a huge success.

“The weather really added to the day and the crowds really did come out in their numbers. Everything passed off peacefully and it was great to see so many individuals and groups put in so much efforts for the parade.

“There was a real mixture of cultures and it was just great to see so many nationalities and people of different backgrounds coming together to celebrate St Patrick’s Day,” she said.

Among the interested spectators was a group of nine middle-aged women who had travelled from Scotland dressed as nuns.

“We’ve got some strange retain. Not too many Irish nuns must hang around pub doors drinking points of Guinness,” said one of the women outside McGinley’s Bar on the town’s Lower Main Street.

A Garda spokesman said all celebrations had passed off without any incident.