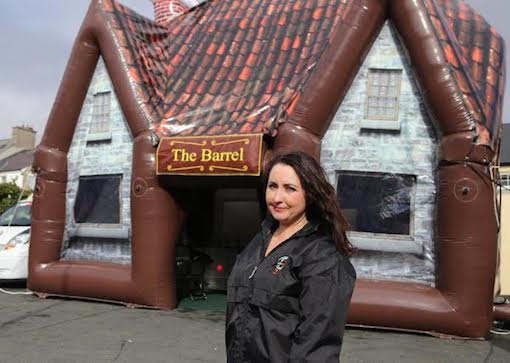 Catriona outside one of her inflatable pubs which was officially launched today.

Businesswoman Catriona Mulhern didn’t feel too ‘deflated’ when she decided to take redundancy from her old job.

That’s because she had plans for a new business which left her walking on air.

And today,  after first unveiling her plans on Donegal Daily two months ago, the Co Donegal mum-of-two finally realised her dream when she launched Ireland’s first Pop-Up-Pub.

The inflatable bar comes complete with bar taps, furniture and even its own fake fire. 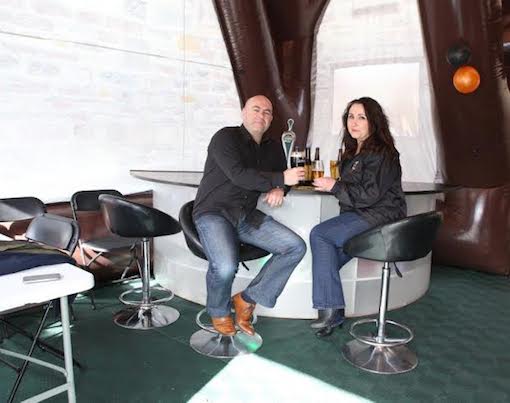 Stephen Maguire from Donegal Daily with Catriona Mulhern from Pop-Up-Pups at today’s launch at the Traveller’s Inn in Milford.

Catriona, who used to work in the bar trade, said the reaction has been amazing since she first began working on the idea.

As well as booking from across Ireland, people have been calling from as far away as Dubai and America.

Catriona said “The reaction has been amazing and not something we ever anticipated. We’re dealing with requests from customers all over the world including the USA, continental Europe, the UK, Asia, Canada, Australia and New Zealand.

“We have a number of confirmed bookings for the coming weeks up and down the country from Donegal to Tipperary and we even have a booking for New Year’s eve. But this is where the hard work begins now. 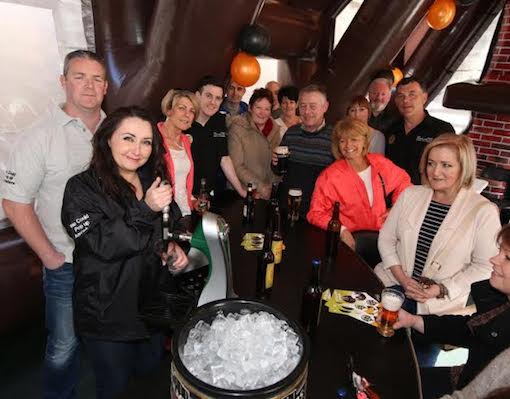 Family and friends help Catriona pull the first pint at the Pop-Up-Pub!

The pop-up-pub provides the unit with a standing capacity of 50, along with the flooring, lighting, bar, optics, taps, a smoking shelter and furniture for 20 people seated.

Customers can then add to the package by including extra seating, refrigeration, heating, cooler and tap systems, catering facilities, bar staff, an extra marquee, lighting, Karaoke, a DJ or a dance floor.

Prices start from €300 and customers provide their own alcohol.

The business also plans to cater for children’s parties and is currently designing a ‘party hut’ where kids have their own party venue in their back garden and houses are spared any mess.

Catriona says partner Paul will do all the heavy lifting while she’ll plan a business strategy at home – something she has dreamed off all her life having spent many years on the road as a sale rep.

“The idea of being able to spend more time at home with our two children is a real bonus. I can plan all our ideas and taking bookings form the office at home and still be with the children,” she said.

Catriona revealed that it’s not just young party animals that are booking her Pop-Up-Pubs for 21sts or 40th birthdays.

In fact, she has even received some calls from nursing homes looking to see if her company  can cater for senior citizens.

“These people obviously can’t got to the pub but if we can bring the pub to them for a night then it will be really something,” she said.

The Pop-Up-Pubs can be customised for weddings and other occasions.

Catriona said the idea for the business just “popped” into her head.

“Some people thought I was a bit mad but sure you can only give it your best shot and hopes it works out.

“All the reaction has been positive and now it’s down to hard work and making it a profitable business,” she said.

Today she was joined by family and friends who toasted Catriona and Paul well in two of the five inflatable pubs the company now offers.

Alongside Paul and Catriona was publican Michael McBride of the Traveller’s Friend in Milford who has helped them from the start with their idea.

“I really does hope it works out for them. They’ll have to work hard in the bar trade but Catriona and Paul aren’t afraid of hard work,” he said.

The business aims to take the hard work out of planning a party and is fully insured for public liability. For more information on the pop-up-pub,visit www.popuppub.com