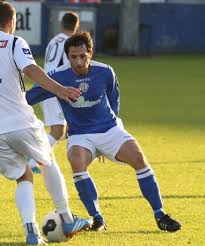 Finn Harps have earned a brilliant 2-0 win over Waterford United tonight at the RSC to send them top of the First Division.

A goal just before half-time from Damien McNulty and a second from Gareth Harkin deep into stoppage-time ensured all three points for Harps.

Harps are unbeaten after three games and still haven’t conceded a goal and look like a side capable of launching a sustained promotion push this season.

Waterford came into this clash with identical form as Harps winning one and drawing one.

They had the better of the opening exchanges  in an entertaining first-half which was played on a superb surface at the RSC.

However, it was Harps who struck first and it happened on the stroke of half-time.

Brian McGroary swung in a free-kick from the right and Damien McNulty was left free at the back post and he made no mistake with a powerful header.

Shane Nolan was controversially sent-off early in the second-half and the decision incensed both the Waterford management and support.

The sending-off inspired the ten men of Waterford and they bravely battled to get an equaliser.

They put Ollie Horgan’s side under lots of pressure but they defended superbly although they did have the crossbar to thank.

Brian Nolan struck a wonder-strike from thirty-five yards out that had Gallagher beaten but thankfully for Harps the ball flew off the crossbar.

Deep in stoppage-time with Waterford pushing everybody forward Harps hit on the counter-attack.

Midfielder Gareth Harkin broke away and slotted past Matthew Connor to seal all three points.

The three points will make the long journey home all the easier and Harps face Cobh at Finn Park next Friday night hoping to continue their excellent start to the season.