A young woman drove a man on the bonnet of her car and broke a red light after he demanded she take him for chips. 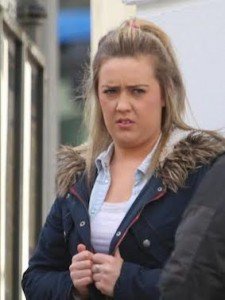 Lisa McGinley – drove man on bonnet of her car. Pic by Northwest Newspix.

Student Lisa McGinley drove her car for more than 500 yards up the Main Street of Letterkenny with the stranger on board.

The court was shown CCTV footage of the incident which took place on October 20th, 2013.

The footage showed hundreds of revellers emerging from a local nightclub and a man jumping onto the bonnet of Ms McGinley’s white Honda Civic car.

The video then shows the man giving the thumbs-up to passers by as Ms McGinley carries the man on the bonnet, before breaking a red light and then pulling in at a local chip-shop.

The man is then seen shaking Ms McGinley’s hand after the incident.

Solicitor for McGinley, of Broomfield, Castlefin, Lifford, Mr Frank Dorrian, said the man was a complete stranger and said he would only get off the car if the driver took him for chips.

He added that his client was very anxious on the night and had been remonstrating with the man to get off her car bonnet.

Mr Dorrian said his client was a science student at Letterkenny Institute of Technology and had no previous convictions of any kind.

Judge Paul Kelly asked “Why didn’t she just stop? What would have happened if this lunatic had fallen off the bonnet?”

The court was told the identity of the man who jumped onto the car bonnet was still not known.

Ms McGinley faces three charges including dangerous driving, driving past a red light and using a vehicle without an NCT certificate.

Judge Kelly said he was recommending that Ms McGinley undertake the local Pro Social Drivers course to improve her skills and knowledge of the road.

WOMAN DROVE MAN ON BONNET OF CAR AFTER HE DEMANDED TO BE TAKEN FOR CHIPS was last modified: March 23rd, 2015 by Stephen Maguire
Tags:
bonnetchipscourtdangerous drivingdonegalJudge Paul KellyLIsa McGinley