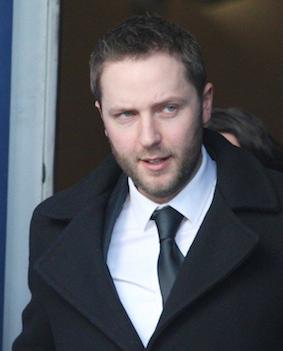 Former Finn Harps manager Patsy McGowan has been ordered to pay a man €15,800 damages after he brutally assaulted him in the boardroom of the club.

The victim, who is now 34, told the court how he had grown up beside Finn Park and was a  fan of the club all his life.

He sold programmes as a young boy and went to as many games as he could.

He was involved in an unofficial supporters club called ‘From Behind The Nets’ since 2004 but decided he would like to take a more active role and became a board member in 2008.

He attended a board meeting on the night in question and the issue of online debate was raised and Mr McConnell accused Mr McGowan of making certain online allegations.

In response, McGowan turned around and punched Mr McConnell square in the face while he had his arms folded causing him to fall back and land on the floor.

In evidence, Mr McConnell then revealed that his attacker jumped on top of him, dragged him up and down the floor and pulled clumps of hair out of his head.

McGowan, of Knock, Ballybofey was eventually pulled off his victim.

Mr McConnell, who had a well-known butcher shop in the town, was taken to NowDoc for treatment.

The victim said he could not return to Finn Park out of embarrassment and anxiety and said that many people called into the shop after hearing about the attack.

McGowan was found guilty of attacking Mr McConnell at the district court and ordered to pay his victim €1,750.

Barrister for the victim, Mr Seamus Breen, said to this day McGowan has in six years never tried to apologise to Mr McConnell and he has not received “a phone call, letter or email.”

Barrister for Mr McGowan, James O’Donnell, said his client was a man in his 70s who said he was under a lot of pressure at the time and that he bore no ill will towards Mr McConnell.

Judge John Hannan said he was not surprised that Mr McConnell had difficulty getting involved with his local soccer club but was pleased to note that he had got on with his life in general and was engaged to be married.

Speaking after court, Mr McConnell said he did not wish to make any further comment other than he was glad that his ordeal was now over.