BUSINESS FOCUS: AN ‘EGGS-TRAORDINARY’ CAREER AT RANDOX TEORANTA FOR THE FIRST #DUNGLOE2020

As Easter arrives, global biotech firm Randox, is celebrating the success of its first recruitment drive, as part of its planned expansion under the #Dungloe2020 programme. 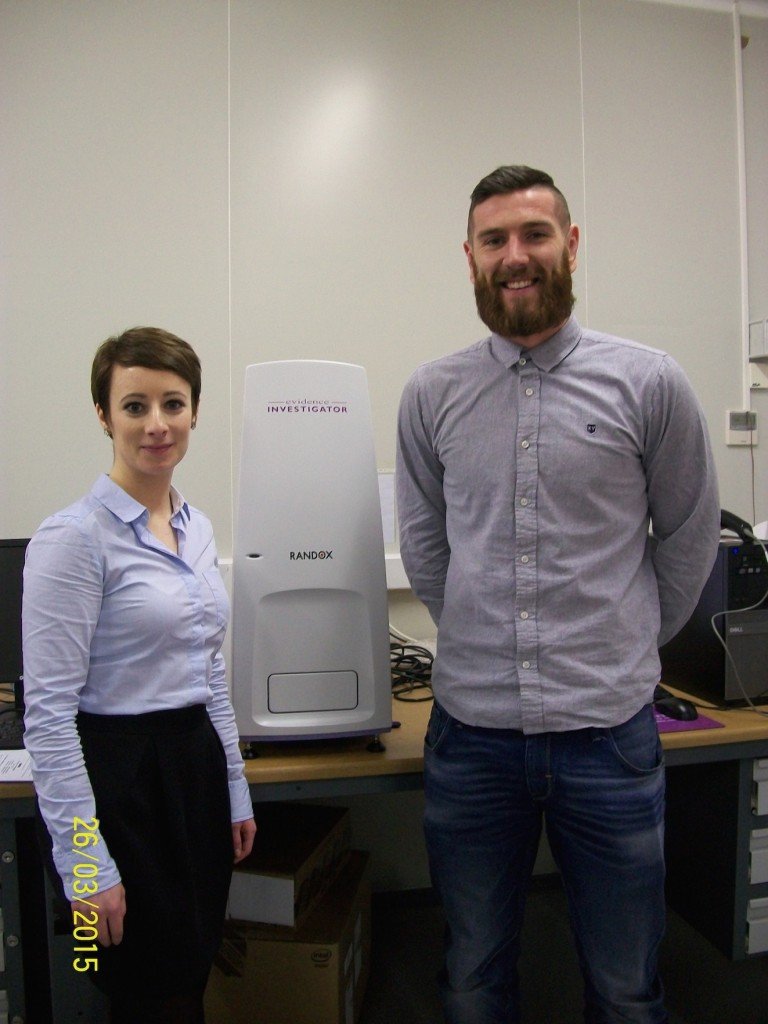 Lisa and Darren who are working at Randox.

In October 2014, the company laid out its vision for Randox Teoranta, a leading life science and engineering centre, which includes a major investment of €25m in the site. This significant investment will see employment figures at Randox Teoranta rise to 540 by 2020.

Recruitment began in earnest in the New Year and for the last few weeks, the first of the #Dungloe2020 life scientists, engineers and software specialists have been getting to grips with their new roles at the frontline of improving healthcare; pioneering research and building technology to make a real difference in the diagnosis and treatment of conditions such as Alzheimer’s and diseases of the kidneys and liver.

One of the new recruits, Dr Lisa Staunton, a PhD in Protein Biochemistry, has been with Randox for two months.

Lisa said “I’m passionate about what Randox is doing and pleased that I am using my experience to bring scientific breakthroughs in health care directly to the patient. I’m originally from Ballyshannon and was working at the Conway Institute at UCD, but now I can be at the cutting edge of research at home!

“Randox has a progressive way of making the most of your skills, I’m learning new skills from the team and they are learning from me, it is about how we can best fit each other to achieve our goals and not a lot of big companies have that flexibility. It is brilliant being able to put in a good, productive day in at the laboratory and then go for a run on Rossnowlagh beach.”

23 year old Mechanical Design Engineer, Darren McGeever is also among the first of the #Dungloe2020. Darren graduated in 2014, with an Honours in Mechanical Engineering from Letterkenny Institute of Technology and was concerned that he might have to emigrate:

“I’m heavily involved in the local GAA and Soccer teams and was worried that I would be joining a long list of former players who have had to emigrate for jobs; so I applied as soon as I heard about #Dungloe2020. It is just fantastic I could get a job like this right on my doorstep.

“I learn something new every day, the technology being developed here is truly ground-breaking and it is great to be part of that, so early on in my career. As well as studying at Letterkenny I.T., I also studied at Galway I.T., back then I used to go home to a cold house – now when I finish work I go to a warm house and my mum’s dinners!”

Dr Peter FitzGerald, Randox MD said harnessing the skills of the community is the key to success of the #Dungloe2020 campaign:

“The interest we’ve had to date is wonderful – we are attracting high calibre life scientists, engineers and software developers from within Donegal, the rest of Ireland and abroad. I’d like to congratulate and indeed welcome the first of our #Dungloe2020 staff, who will each play an important role as we strive to improve health across the globe.”

“Údarás na Gaeltachta, are very pleased with the success of the first wave of recruitment for #Dungloe2020. We would like to support Randox Teoranta in their continued recruitment drive over the Easter period and we wish the company continued success with the campaign. We are confident that Randox will achieve its ambitious recruitment targets.”