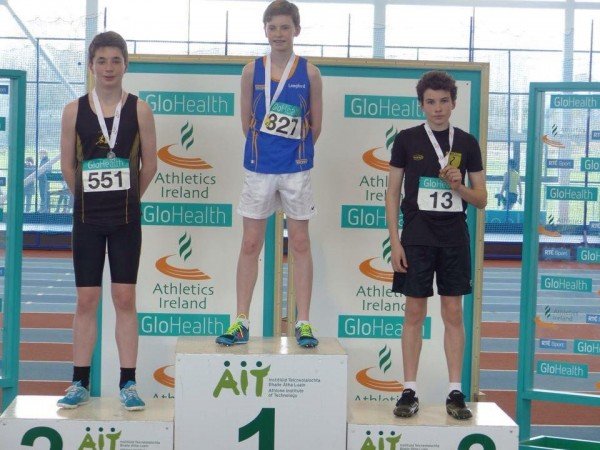 Congratulations to Precious Aduaka and Tara Carr on their medal winning performances at the AAI National Juvenile indoor Championships.

Both girls returned home from Athlone IT last weekend with bronze medals.

Tara added a bronze medal to her vast collection in the U19 High Jump while Precious won her first ever national medal in the U12 Shot Putt.

This weekend David Smith was in action in U14 800m.

He came home with a silver medal. He started off strongly, sitting in 2nd at the end of first lap, but as pace increased on lap 2, he began to slip back, falling as far as 7th at one stage and seemed to be struggling.

However, with about 300m to go, he suddenly found another gear and rapidly picked off runners in front of him, getting back to 2nd place by the bell.

Unfortunately, that was just as Cian McPhilips (Longford A.C.) kicked for home and in a matter of seconds he was away and clear.

David gave chase but didn’t have enough left to narrow the gap appreciably, settling for defending 2nd place from Naas A.C.’s Michael Lawlor, which he managed to do reasonably comfortably in the end.

He finished in 2 min 17 secs, knocking over seven seconds of his previous PB.

It was great to see LAC athletes being rewarded for their hard work with medals, PBs & qualifications for finals.

Well done to our medal winners and to all the athletes who participated over the two weekends.