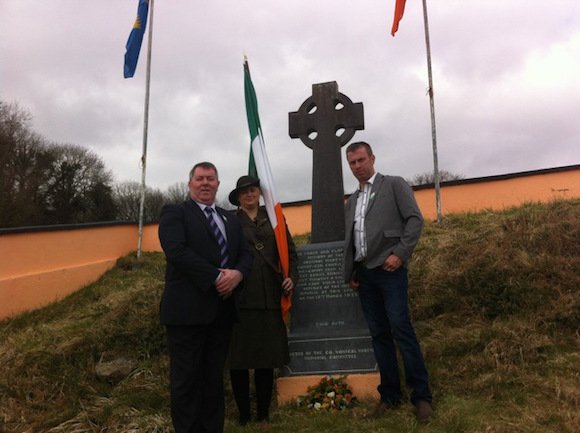 Speaking following today’s Commemoration Ceremony in Stranorlar where today’s Main Speaker was Sinn Féin MEP Martina Anderson, Cllr Doherty paid tribute to all those who travelled both near and far to be in Stranorlar to pay homage to the Drumboe Martyrs.

“Today on Easter Sunday, Republicans from all over Donegal, and even from surrounding counties in Tyrone, Fermanagh, Derry and beyond have gathered here in Stranorlar to remember these men who sacrificed their lives in Ireland’s struggle,” said Doherty.

“Easter Sunday is a truly significant day in the Republican Calendar as it is when Republicans the length and breadth of this island come together at various gatherings and pay tribute to our patriot dead – the brave men and women who made the ultimate sacrifice.

“Here in Drumboe, this momentous occasion was highlighted thanks to the inspirational and passionate speech which was delivered by today’s key speaker, MEP Martina Anderson.

“Martina honoured all those who have gave their lives throughout the various stages of the struggle and who dedicated their energies to the realisation of the Republican vision – a Republic based on our core principles of fairness, equality, and justice for all.”

“Today’s big crowd here in Drumboe reflects the appetite which the people of Donegal have for political change and for the creation of a society where the core values of the proclamation are enacted.”