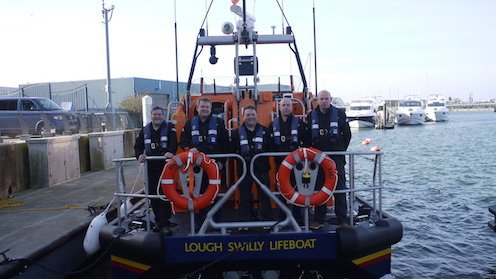 The Lough Swilly Shannon on its way home to Donegal.

The new lifeboat is the first of its class to be put on service in Ireland and the first to be named after an Irish river, the previous classes are all called after UK rivers.

The lifeboat crew onboard will be joined by RNLI staff coxswain Martin Philips, who is using the passage home as an opportunity to continue with the training programme for the state of the art lifeboat.

On the last leg of the passage from Portrush in county Antrim the crew will be joined by RNLI Divisional Operations Manager Darren Byers but the honour of taking the lifeboat into Lough Swilly will fall to the station Coxswain Mark Barnett.

The station is hoping for a large turnout at the Buncrana pier as the new lifeboat arrives into the harbour to take up residence on the Donegal coastline. The lifeboat is named Derek Bullivant and has been largely funded through a legacy from Mr Bullivant who hailed from Bewdley, Worcestershire, UK and who passed away in September 2011.

The Shannon is the latest class of all-weather lifeboat to join the RNLI fleet and the first to be propelled by waterjets instead of traditional propellers, making it the most agile and manoeuvrable all-weather lifeboat in the fleet. Waterjets allow the vessel to operate in shallow waters and be intentionally beached.

The new lifeboat was developed to operate in the worst of sea conditions and is self-righting, automatically turning the right side up in the event of a capsize. Its unique hull is designed to minimise slamming of the boat in heavy seas and the shock-absorbing seats further protect the crew from impact when powering through the waves. The lifeboat has a top speed of 25 knots and a range of 250 nautical miles, which makes it ideal for offshore searches and rescues in calm and rough seas.

Commenting from onboard the Shannon lifeboat, Lough Swilly RNLI Coxswain Mark Barnett said, ‘This day has been a long time coming for our lifeboat station and it is one that is very emotional for all of us. The arrival of a new lifeboat is a huge investment in the community by the RNLI. It’s not just a financial investment but it is also an investment in our lifeboat crew, the people who live here and the people who use the waters around our station, whether locally based or just passing through.

This will be its home for many years to come and it will be launched on countless rescues and save many lives. We would also like to express our gratitude to the late Mr Derek Bullivant, whose name is proudly displayed on our lifeboat and whose generosity made this possible.’

Once the lifeboat is on station, training will continue for the remaining volunteer lifeboat crew at Lough Swilly RNLI before the lifeboat is officially put on service and the previous one is retired into the relief fleet.