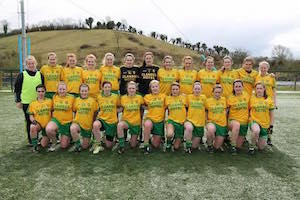 Davy McLaughlin’s senior ladies play host to Westmeath in their final game in Division 2, having already secured a place in the semi-final.

The senior team have won all but one game in this campaign – drawing with Cavan the last time out a fortnight ago.

It’s great to see the game being hosted in Inishowen this Sunday, with throw-in in Carndonagh at 2.30pm.

The Minor Ladies take to the field again this weekend for the second game in their Ulster Championship.

The squad will be hoping to get their first win this weekend following a defeat to Tyrone in their first outing.

The girls showed great heart and determination to pull the game back in the dying minutes but unfortunately ran out of time.

They will be hoping to take that fight into this weekend’s game in the hope of overturning Down. The girls take on Down on Saturday in Clonduff, Co. Down. Throw in is 3pm.

The U14 Development League team are also on their travels this weekend.

They travel to Glenavy to take on Antrim (1.30pm) in their second game, having lost narrowly to Down at N Padraig Muff two weeks ago.

Sabrina White and her team can also take some heart from their performance against Down last time out when they were unlucky not to take the points.

The U14 development league team who play Antrim on Saturday

The U14 Championship team meanwhile should have been playing Fermanagh in their first game tomorrow, but lakeland county pulled out of the Championship two weeks ago.

The lateness of the withdrawal has been frustrating for Donegal; it means there are just three teams in the group – with Cavan getting two home games and Tyrone having to go away twice.

It also means Donegal will have just two games – both within the space of a week (away to Cavan on April 25 and home to Tyrone on May 2).

They now play St Eunan’s U16s at O’Donnell Park tomorrow (Saturday) in a friendly instead (throw-in 11.30am).

The Donegal Minors who travel to Down on Saturday