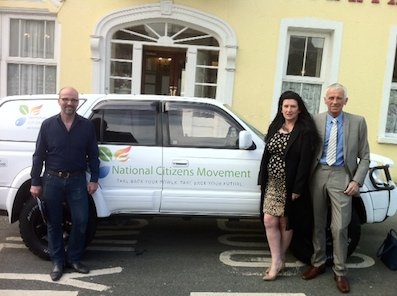 Members of the National Citizens Movement in Ballyshannon today. Pic by Donegal Daily.

Ireland’s newest political party was launched today in what is deemed to be Ireland’s oldest town.

The group, which describes itself as a broad collective of ordinary people looking to make change, signed the constitution and charter at Dorrian’s Imperial Hotel.

Up to 30 people from across the country attended the launch.

Spokesperson Elizabeth Hourihane, a housewife from Cork, said they intended to build a nationwide platform of candidates from every county.

And she wants candidates from Donegal to put themselves forward as part of the National Citizens Movement.

“That is our aim. This is just the beginning. We chose Ballyshannon as it is reputedly the oldest town in Ireland and we are the newest political movement,” she said.

Ms Hourihane said she intends to stand in the Carlow/Kilkenny constituency.

The new political grouping said they will not enter talks with any of the main political parties including Fianna Fail, Fine Gael or Labour but are open to talks with Sinn Fein.

Mr Hourihane said they see themselves linking up naturally with the Independents if they are successful and end up gaining seats in Dail Eireann.

“We admire what the likes of Luke ‘Ming’ Flanagan, Claire Daly and Mick Wallace have achieved since they entered the Dail and we would like to add to that,” she said.

The group said they are now recruiting candidates to stand in the next general election across the country and said they are already strong in urban centres such as Dublin and Cork.

They said the strongest message they are getting on the ground is that the people of Ireland no longer want to be part of Europe.

Mr Hourihane added “I will never forget standing peeling potatoes at my sink when I heard about the bank bail-outs. I cried at the sink.

“My daughter came in the door and I was in floods. She thought somebody had died. I told her that we had just lost our sovereignty but so many people did not understand it that day.

“That is when I decided I had to do something and stand for election. I’m an ordinary person but I know that we need change and that the likes of the established political parties are not going to bring that change.”