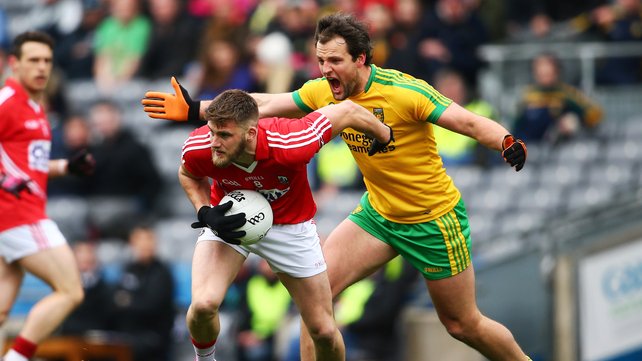 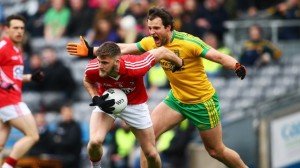 Donegal have been beaten by Cork in their National League semi-final clash at Cork.

A second-half blitz of goals from Cork ensured the Rebel County would contest the 2015 Allianz National League final in a fortnight’s time at Croke Park.

In what was an absolutely cracking encounter at Croker it was Cork who struck the fatal blows by scoring THREE goals in the second-half.

The sides couldn’t be separated at half-time but a quick brace of goals inside five minutes from Colm O’Neill and Brian Hurley inflicted real damage on Rory Gallagher’s side.

However, points from Martin McElhinney, Michael Murphy and Colm McFadden brought them to within a score of Cork.

Then a major turning point, Christy Toye found Patrick McBrearty inside and he was one-on-one with the Cork goalkeeper O’Halloran.

Unfortunately for Donegal McBrearty was thwarted by O’Halloran and within TWO minutes Cork had the ball in the back of the net again.

A great team move by Cork and superb play from Brian Hurley released Colm O’Neill who scored his second goal of the match.

That effectively decided the game as a contest and Cork ultimately ran out comfortable winners in the last ten minutes with a six-point cushion between the sides.

Murphy and McBrearty added late scores to reduce the deficit to four points but it was too little too late and Cork booked their place in the final.

Rory Gallagher won’t be too despondent about the defeat, but he and his management staff will be worried about the concession of the goals.

Donegal don’t cough up goals too easily, but they were exposed badly in the second-half as Cork helped themselves to three goals.

Tom Clancy found the net in the first-half for Brian Cuthbert’s side who delivered an accomplished performance.

Next up for Donegal is the Ulster Championship clash with Tyrone in just FIVE weeks time.