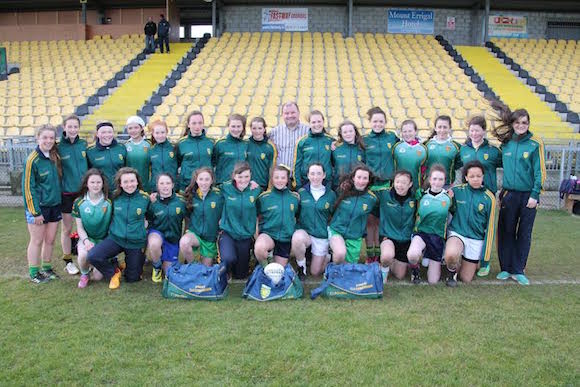 COUNCILLOR STEPS IN TO HELP DONEGAL GIRLS U14 FOOTBALLERS

A BIG-hearted county councillor has stepped in to help out the county’s U14 girls county football team.

While many people think gaelic games are financially ok, the truth is the ladies game struggles along from week to week.

And that means the girls county teams have to fundraise for everything.

But when Cllr Ciaran Brogan heard the squad – from 17 parishes across the county – were short of gear, he stepped in and provided the girls with 32 new kit bags.

“These girls have been out training and playing for their county in the hail and snow through the winter and when I heard they needed some help, I was delighted to be able to do something for them,” said Cllr Brogan.

“The least we can do is to see they are properly looked after. The girls deserve the support of the county because they are playing for all of us.

“For me they are just as important as any team – boys, girls, men or ladies – who wear the gold of Donegal and play for their county. I want to wish them all the best in the Ulster Championship this year.”

COUNCILLOR STEPS IN TO HELP DONEGAL GIRLS U14 FOOTBALLERS was last modified: April 15th, 2015 by John2