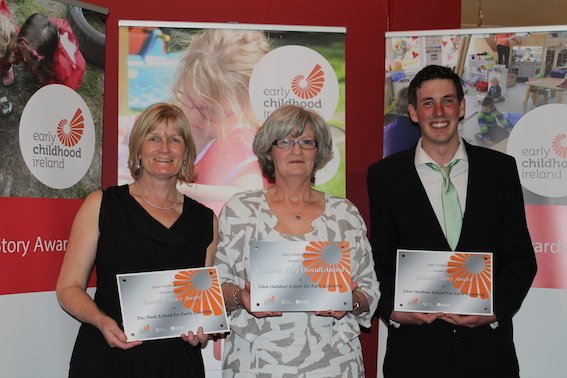 A Co Donegal school has beaten off competition from across Ireland to win a top early leaning award.

Sally O’Donnell and her team were presented this National Award from Early Childhood Ireland, whose CEO is Teresa Heeney native of Ballybofey, for their wonderful initiative called ‘Our Christmas Play.’

This learning story is set when Christmas was coming and the children were discussing last year’s Christmas play.

According to Sally “As the excitement gathered around the memories we began to gather ideas on what the children thought they would like to do this year. Their imaginations were on fire as they created first the play, then set about creating the stage, all outdoors and using found materials. This was their play from start to finish, ensuring that next year they would also be able to fully recollect the great memories of ‘The Search for Santa!’”

The Glen Outdoor School for Early Learning also picked another award for ‘The Enormous Turnip’ another learning story that takes place when Autumn is here and so is harvest time.

As the story goes: “These children re-enact The Enormous Turnip story to harvest their very own pumpkin! There is a lot to figure out! First there is pulling the pumpkin and then there is transporting it. How will they do all this?? Well… the Glenswilly way of course!”

The Letterkenny team are in Dublin for Early Childhood Ireland’s 2 day conference “Play on the Brain” finishing today, Saturday 18th April, in Croke Park Conference Centre with 700 delegates in attendance.

Some of the other key issues to be addressed at the 2 day Early Childhood Ireland conference are commercial rates and VAT, problems with the ECCE (partially free preschool scheme) contract, the inspection processes, support for children with additional needs and recognising the sector as professionals with appropriate pay and conditions.