Errigal Scout County members Dessie Taylor from Derry and Dympna Whoriskey from Newtoncunningham got a jubilant surprise when they attended the National Council of Scouting Ireland which was held in the RDS at the weekend. 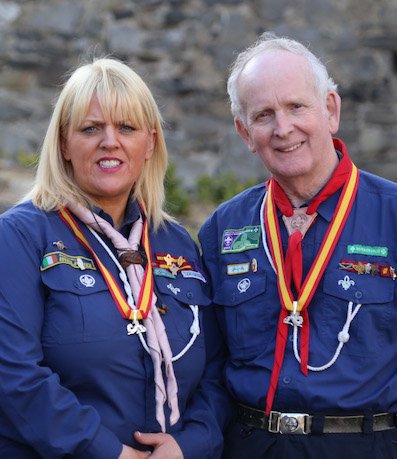 They both were bestowed with the Order of Cu Chulainn which is the highest honour confered on a volunteer within Scouting.

Dessie and Dympna were equally shocked when during the presentation members of their immediate families appeared on stage, unknown to them both families has travelled to Dublin to celebrate their achievements with them.

The Order of Cu Chulainn is awarded to volunteers in recognition for their commitment and dedication to Scouting over their lifetime.

Dessie has been a member of his group in Derry for over 40 years, while Dympna has been an active member of 9th Donegal (Newtoncunningham) for the past 26 years.

All their Scouting friends wish to congratulate both on receiving this honour.