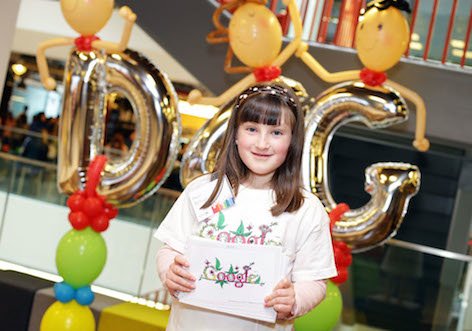 Pearl McHugh from Ballyshannon with her winning entry.

A young Donegal girl certainly proved she knows how to doodle!

Pearl McHugh from Holy Family National School, Ballyshannon, has been named as the winner of the Group 2 category (ages 7-9) of Google’s seventh annual Doodle 4 Google competition.

Pearl was up against the competition’s 74 other finalists and won the most public votes of any entry in her age category.

Eight year old Pearl was presented with her award at a special prize-giving ceremony in Google’s EMEA headquarters in Dublin today where six year old Harry Kane was named the overall winner.

The theme of this year’s event was ‘My Perfect Day’. Pearl’s winning doodle was inspired by her love of garden and uses a variety of flowers, foliage and butterflies put a spin on the iconic Google logo.

Speaking at the ceremony, Ronan Harris, VP Sales and Operations said “This is the seventh year of the competition and we are constantly amazed at the number of entries that keeps growing year on year. This year we had a record 5,085 entries and I would like to thank each student who got involved.

“The level of creativity shown by this year’s doodles was also extremely impressive. This year’s theme of ‘My Perfect Day’ really captured the imagination of the doodlers and allowed them to create something that was important to them. This is what was particularly special about Harry’s doodle.”

“I would also like to express a big thank you to those who voted, as well as the teachers and parents that supported the students.”

A record 140,000 votes were registered with the highest number of votes in each class group making it through to the overall finals. From these five group winners, the Google Doodle team in Mountain View, California then had the difficult task of choosing the overall winner.