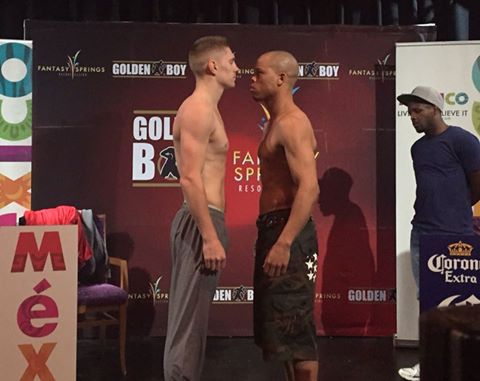 BOXING: Jason Quigley has weighed-in ahead of his latest bout against experienced campaigner Joshua Synder in California. 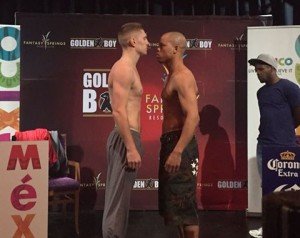 While the whole world of boxing may be talking about the Super-fight between Floyd Mayweather Jr. and Manny Pacquiao in Las Vegas on Saturday night, Donegal fight fans will have their eye on rising star Jason Quigley tomorrow night.

Quigley is aiming to make it six wins from six tomorrow night and the affable Ballybofey boxer will be hoping he can maintain the perfect record he has since he turned professional last year. 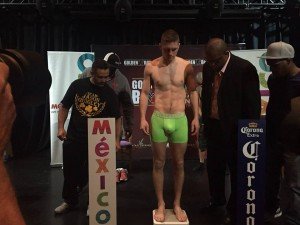 Quigley has yet to go the distance in any of fights and has enjoyed a blistering start to his career under the guidance of Oscar De La Hoya’s promotional team Golden Boy Promotions.

His reward for his impressive beginning in professional boxing stateside is to feature live on TV sports giant FOX tomorrow night.

It’s primetime viewing and will Quigley’s fight will be watched by millions in the USA.

His opponent tomorrow night Joshua Synder has only fought twice in the last two years and has lost his last FIVE fights despite an initial promising start to his career.

Synder is 35 and is a wily, tough and versatile boxer, but Quigley and his team are confident they can get the job done.

The opportunity for Quigley to fight LIVE on FOX provides the Donegal man with the perfect platform to showcase his skills the fight fraternity in the USA.

Quigley is expected into the ring at Fantasy Springs, Indio at around 7pm (3am Irish time)

Quigley’s supporters can watch the fight LIVE on the Fox sports channel online.