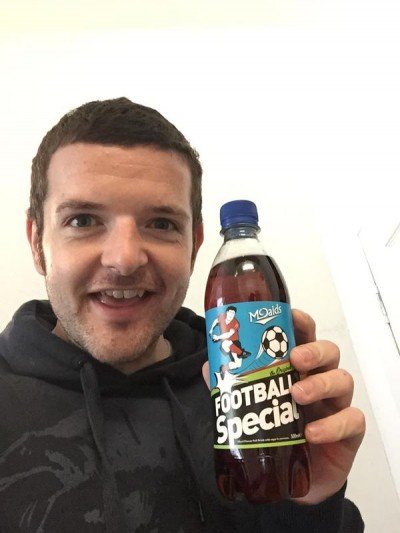 SCOTTISH COMEDIAN DELIGHTED TO GET HIS ‘SPECIAL’ DONEGAL BREW

Scottish comedian Kevin Bridges couldn’t hide his delight when he finally got his hands on his favourite drink Football Special.

The hugely popular comedian immediately took to Twitter to express his joy that the soft drink was now being stocked in his native Glasgow.

Bridges posted a picture of the Football Special bottle and wrote the following caption.

“Good to see this fine brew has made it over to Clydebank from Donegal! @The_glen_cafe Yaldy! 🙂

A few weeks back Donegal Daily revealed how Seamus McDaid, 26, had been charged with giving the unique-flavoured soft drink a new lease of life – across the globe.

He was tasked with promoting the brand across the USA in major cities like Boston and Philadelphia.

McDaid also revealed how he was stocking the brand in Glasgow because of the large Donegal diaspora in the city.

It seems his efforts are already paying off. 🙂

SCOTTISH COMEDIAN DELIGHTED TO GET HIS ‘SPECIAL’ DONEGAL BREW was last modified: May 6th, 2015 by Mark Forker