written by Stephen Maguire May 13, 2015
Facebook0Tweet0LinkedIn0Print0

Donegal native and Letterkenny Athletic Club member Brendan Boyce has been selected by Athletics Ireland to represent Ireland at The European Cup of Race Walking in Murcia, Spain. 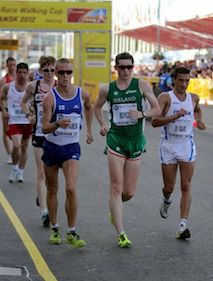 This is the third time since 2011 that Boyce has been selected to compete in the competition and he will also be the senior team member at the event.

Boyce secured his place on team Ireland by recording a 1:26:55 over 20K last May at the World Cup of Race Walking in China.

Boyce has been on form recording a personal best of 3:48:55, at the 50K Walk at the recent IAAF Race Walking Challenge Permit Meeting in Dudinska, Slovakia – twelve minutes inside Olympic qualifying time.

This strong performance also secured Boyce’s place for the World Championships in Beijing at the end of August.

Commenting on the selection for the European Cup of Race Walking, Brendan Boyce said, “I’m very proud of being selected to represent Ireland for the third time on an international stage. My first major international was at the 2011 European Cup of Race Walking, so this particular competition has always been a special one for me. In addition, I’m also the senior member on the team so I hope to inspire other team members to give their very best performance in Murcia. It’s a very exciting time for everyone on the team and we’re really looking forward to preparing for the event.”

Boyce continued, “To help me prepare for the race I have committed myself to a training camp in Almeria, Spain ten days prior to the competition. My brother Brian has sacrificed his own holidays to come out with me for half the camp to help me with my training sessions. It’s hard to create a professional environment with the limited funds available. My family has always been my best supporters with my ambition in sport and I hope to get the results to reward them for that.”

The European Cup of Race Walking will take place on the 17th May and Boyce will be competing with Cork’s Alex Wright and Luke Hickey in the 20k Walk. Wright is looking to back up his World championship qualifier from last year with another strong performance in Murcia. Luke Hickey of Leevale A.C is also part of the team and will be looking for the European U23 time.