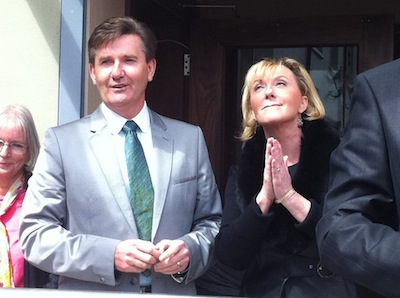 DANIEL TO VOTE ‘YES’ AS HE DECLARES ‘EVERYONE SHOULD BE EQUAL’

written by Stephen Maguire May 15, 2015
FacebookTweetLinkedInPrint

Daniel O’Donnell has revealed he will be voting Yes in next week’s marriage equality referendum.

The Kincasslagh star said he believes that a Yes vote will not make life any different for those who advocate a No vote.

He said that “those who know what they’re talking about” are saying that families won’t change.

“I think everyone should be equal,” he told Ray D’Arcy on RTÉ Radio One this afternoon.
“I can’t see what a Yes vote is going to do against anybody.”

He said that it was difficult to work out what the referendum was all about, but said that he “genuinely” felt people should be equal.

And the singer said he did not necessarily agree with those who say children should have a mother and father.

He even pointed to his own personal situation and cited the sudden death of his own father.

“I was brought up without a father. My father died before I knew the benefit of a father. It was just my mother.”

He said while he could “only speak for himself”, but felt that a Yes vote would change the lives of gay people.

“I just feel we’re discriminating against a lot of people who feel their lives would be better. I can’t see anything on the other side that will be detrimental. All of the people who know they’re talking about are telling us that it’s absolutely no difference who brings up the children, as love as they’re brought up in a loving environment.”

Daniel then asked the RTE radio presenter what way he intends to vote, to which the presenter said he couldn’t say.

“I might be fired after this, too,” laughed O’Donnell.

DANIEL TO VOTE ‘YES’ AS HE DECLARES ‘EVERYONE SHOULD BE EQUAL’ was last modified: May 16th, 2015 by Stephen Maguire
FacebookTweetLinkedInPrint
Tags:
daniel o'donnelldonegalmarriage referendumvoteYES