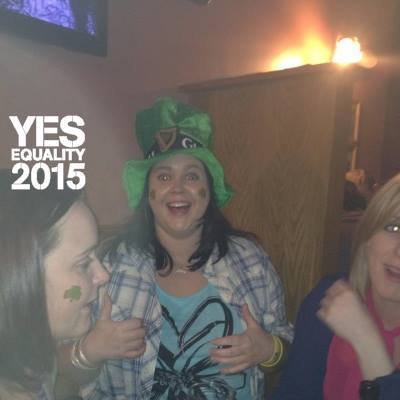 written by Stephen Maguire May 20, 2015
FacebookTweetLinkedInPrint 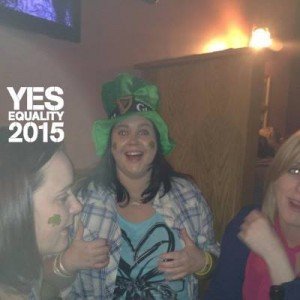 A Donegal woman has made an emotive plea for voters to say YES on the forthcoming referendum on same-sex marriage after disclosing the details of a conversation she had with a taxi driver from Dublin.

Marianne Forker 31, from Burtonport took to her Facebook timeline to tell her friends of the conversation she had with a taxi driver in the capital whilst on her way to a job interview.

WARNING: The following post is very long, so make yourself a cuppa before siting down to read it.

So my day started with an interview and on my way I got talking to the pleasant taxi man that was taking me to it. The usual chat.

“Donegal eh, I thought so with that accent. It’s beautiful up there. You nervous?”

“Nah sure I’m awesome! I’m confident that’ll come across to the interviewer.

You’ve only been chatting to me for a few minutes and you can see that right?!

Imagine an hour with me!!”

Of course inside I was bricking it, I get unbelievably nervous in interviews and usually start talking about Dolphins!

It’s what happened when we were stopped at some lights that threw me.

He pointed at one of the many ridiculous bordering on hilarious (if it wasn’t so scary that people actually think that way) vote no posters I’d seen already on the journey so far.

“So what do you make of all that then? You know I’ve heard it might actually pass? I don’t mind them but when you start to bring marriage and kids into it, well it’s not right!”

He hadn’t even waited to let me answer his initial question. I sat there quietly listening to him rant on about “them” like we’re a different species and its wrong, plain wrong and the kids and the bullying etc.

This continued for a good ten minutes and as I sat there upset and I guess angry debating with myself whether to just sit there and let it go or try and change the subject.

Sometimes it’s easier. There is always that fear if you stand up and say something, outing yourself, what the reaction could be.

But then the beauty of standing up for what you believe to be true is others will see you standing and maybe stand up as well.

I remembered something I read that if you are ashamed to stand by your colors, you had better seek another flag.

Never be bullied into silence. Never allow yourself to be made a victim. Accept no one’s definition of your life; define yourself. This is just a small part of who I am.

My friends don’t introduce me as have you met Maz? she’s gay! It more often or not goes, have you met Maz? She’s the sarcastic, will take the absolute piss out of you for anything fecker I was telling you about and whatever you do please, please for the love of god do not mention the dolphins!!

I know I’ve been lucky with my friends and family they’ve never been anything but supportive and accepting of me and some really enjoy the new angle they have for taking the piss!!

You know who you are!! I also know that not everyone is as amazing as they are.

There are still small minded and bigoted people out there and so far I’ve been lucky to meet very few.

Throughout that whole thought process he was still talking I actually thought of singing Jessie J’s
“You talk that
Blah blah that la la, that rah rah s**t

And I’m so done, I’m so over it” at him but instead being the polite person that I am I waited for him to catch a breath.

My side of the conversation went along the following lines. You know sir, I’m a hopeless dreamer and I hope, no I believe this time you are the minority and we will get the yes vote.

I can see you’re not a bad person, just maybe a little ignorant, lacking in the understanding and knowledge of the issue itself.

From the brief time we spent talking I can see that and I know whether you’d admit it now or not that you think I’m a nice normal girl.

The person I love doesn’t define me, as it doesn’t you. It’s not a choice. I’m sure you didn’t choose to fall in love with the woman you’re married to, you didn’t go out one day and pick a random person, love found you.

It happens accidently, in a heartbeat. You didn’t have to ask me or any other stranger was it ok by them if you married her. So tell me why should I?

To which he stuttered you’re gay, I clearly had forgotten the rainbow that usually hangs over my head in the rush to leave the apartment.

I continued on, I was on a roll now! Why can’t I have my happy ending? My happily ever after? The same rights that you have, I’m no different.

Why would you limit the right to marry based on who I love? Can you even look me in the eye and tell me why you would want to?

This isn’t about religion or children it’s about being accepted and afforded the same rights as everyone else.

Marriage isn’t a privilege it’s a right and as long as we have these differences in our country being gay will continue to be seen by some as being wrong.

I left him with one of my favourite quotes no not “Everyone likes a drink, nobody likes a drunk” it wouldn’t really work in this instance!

Instead one day I will marry my best friend, the one I laugh with, live for, dream with and love. And in her smile I’ll see something more beautiful than the stars and I hope to be able to do this in the country I love.

I usually give a tip in the way of currency but how about some more words Mr taxi man?

How about giving every other human being every right you claim yourself and vote yes.

And on that note I got out. It’s not really been my week with taxis has it!?!

Needless to say my interview wasn’t my best my mind kept going back to all the other things I should have and wanted to say.

There’s a Greek legend I love about how true soul mates are really two halves of the same person.

That people wander around searching for their other half, and when they find him or her, they are finally whole and perfect.

The thing that gets me is that the legend says how originally all people were really pairs of people, joined back to back, and that some of the pairs were man and man, some man and woman, and others woman and woman.

These people went to war with the gods, and the gods, to punish them, split them all in two. So when you find your soul mate, they really are the other half of you.

Anyways kind of went off point there! As for bringing kids into it, it has absolutely nothing to do with kids.

The complex issue of surrogacy and adoption which will affect everyone not just gay people will be dealt with at a later date in a completely different referendum.

While on the subject of kids whose parents are gay. That whole the kids will be bullied argument is something that really, really annoys me.

Kids aren’t born racist or homophobic they are influenced by the world and people around them.

Can you imagine a world where everyone is treated as equal! This starts with our own country.

How amazing would it be for a child to grow up in a country where all it’s citizens are treated as equals. What kind of message would that send to them, to the whole world!

I love Ireland and I’m so proud to call myself Irish. I don’t think I ever really appreciated that or what an absolute gem of a country I came from until I left it for a few years.

Ireland is breathtakingly beautiful and its people are really one of a kind.

All over the world people see this; we’re a fun, friendly and accepting bunch. I’ve seen this first hand, we’re truly a wonderful group of people!

Let’s show the world just how amazing our people and our little country can be.

I urge you all to vote yes on May 22nd and show not just the rest of the world but your own family and friends that they are equal to you in everyway and whom they love does not define them or matter in any way.

Wishing you all a very gay May!! 🙂