A young woman was left terrified after an attempted bag snatch in Letterkenny last night. 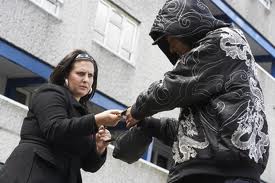 The woman was terrified after the attempted bag snatch. Pic posed by models.

The shocking incited happened just after 8pm in the Larkin’s Lane area of Lower Main Street.
An eye-witness told Donegal Daily that he saw man approaching a woman from behind and then attempt to snatch her bag.
The man got the bag but the woman began to scream in terror.
The man ran towards Pearse Road but dropped the bag and did not get anything out of it.
He escaped towards Century Cinemas and the general shopping area.
There was a lot of people in the area as the popular Inter-firms 5K race had just taken place.
The eye-witness told us “It was shocking to see this especially with so many people around because of the race which had just taken place.
“He had some check on him. The woman was left terrified and she was screaming for ages. At least she go her bag back though.
“You hear of bag snatches in places like Dublin but you rarely had of it in Donegal.
“It was shocking to actually se it happening.”