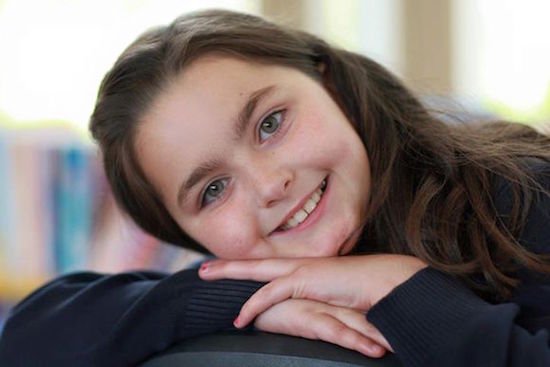 written by Stephen Maguire May 21, 2015
Facebook0Tweet0LinkedIn0Print0

Beautiful Erin Gallagher from Glenswilly who penned her own story to inspire other children. Picture by Brian McDaid.

An eight year old schoolgirl has written about her story with cancer to give other children hope of beating the deadly disease.

Little Erin Gallagher, from Glenswilly, wrote her story after one of her teachers suggested it would help others.

Mum Collette said Erin left her in tears when she recalled so many small details of how she was first diagnosed with the disease when she was just a toddler.

“She said she wanted to write her story as they had been chatting about it with one of her teachers, Ms Geraldine Galligan, in school.

“Geraldine said there were so many miracle children and that they had one amongst them in their classroom and it was Erin.

“I didn’t think much of it to be honest but when I read her story it just left me in tears. She’s a very special little girl. She has been through so much but she is still such a modest little thing,” said mum Collette.

Collette and husband Charlie said they wanted to make Erin’s story public to allow other children who may be unfortunate enough to be diagnosed with cancer to see that they can still have a normal life.

Colette added “Erin is a perfectly normal girl who loves Nathan Carter and footballer Michael Murphy. She is not in remission just yet because it is not beyond the five years since her treatment.

“But she is perfectly normal and apart from a little skin graft on her arm, you could not tell that she has been through so much in her short little life.

“When I read her story and how sh remembered so many small details it just touched a chord with me. I through that if other families and other young children read it, then they could get some hope form it as well.”

Erin will take part in the Donegal Relay for Life charity event at the end of the month and hopes to meet up with singer Daniel O’Donnell once again.

The singer made an emotional connection with Erin when he appeared on stage with her two years ago at the Relay for Life event and even has a treasured picture of Erin.

Colette revealed “Daniel has that picture of himself and Erin in his house in Tenerife and I’m told he is very fond of it. I think that’s lovely.”

ERIN’S STORY – IN HER OWN WORDS

The week after my third birthday I took a sore leg. My Mum and Dad noticed that I had a limp.