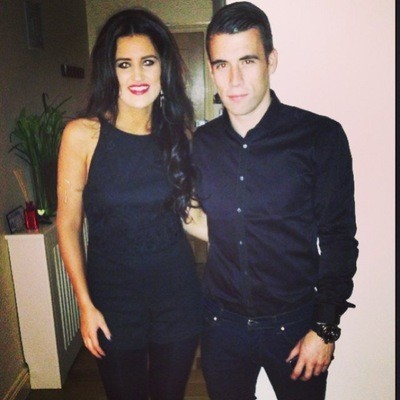 written by Stephen Maguire May 23, 2015
Facebook0Tweet0LinkedIn0Print0

Seamus Coleman and Rachel Cunningham who are to wed next month.

Soccer star Seamus Coleman is to marry his childhood sweetheart in his native Killybegs next month.

The Everton and Ireland star, 26, is to walk down the aisle with teacher Rachel Cunningham.

The couple have been together for several years and became engaged in December 2013 – nine years after they first began dating.

The wedding will take place on June 20th next at Harvey’s Point Hotel outside Donegal Town in front of more than 300 guests.

Among those on the guest-list are many of Coleman’s team-mates from the Premiership club as well as Irish stars including Shay Given, James McCarthy and Aiden McGeady.

Stunning Rachel has already been on her hen party in sunny Marbella with a group of friends.

The girls even brought funny facemasks of Seamus with them to the sun-kissed resort and posed for pictures.

Seamus is yet to host his stag party but it is believed he will be having an informal bash in Dublin shortly.

The couple’s wedding is expected to be a two day affair with many guests being invited back to the Bayview Hotel in Killybegs the day after the wedding.

The hotel is run by Seamus’ dad Henry.

Many locals have also received invites to the wedding by the popular soccer star who is renowned for his down-to-earth manner and friendliness.

Players from Seamus’ former amateur club St Catherine’s FC are rumoured to be staging a guard of honour outside the local church.

Despite his high-profile status as one of the Premiership’s most-sought after players, Seamus is understood to be keen on having a very local-key wedding.

One source revealed “Seamus is such a popular lad and the whole of Killybegs are delighted for him. Nobody is saying much about the way and nobody wants to give anything away.

“It’s not going to be a big lavish affair full of celebrities because Seamus and Rachel are just so down-to-earth. The first people on the guestlist would have ben their close friends.

“It’s going to go on for a couple of days. The final details are being put for Harvey’s Point and then it’s going to be a big private party in the Bayview.

“Killybegs will be looking great that day and it will all be for Seamie and Rachel.”