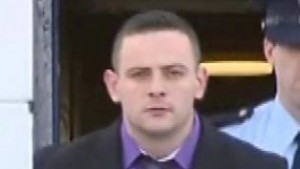 A NOTORIOUS thug who killed a garda by ramming his patrol car has walked free from jail.

He was jailed for seven years in 2011 – and sent just months later to an open prison in Co Cavan.

He escaped from there in March 2012 and was recaptured in Derry where he assaulted PSNI officers.

The then Justice Minister Alan Shatter was forced to apologise over the bungling decision to put Raphoe man McDermott in Loughan House.

McDermott was freed from Midlands Prison yesterday morning, but he didn’t return to Raphoe.

He had 97 previous convictions when he killed Leitrim native Gary who had been based at Buncrana Garda Station when he was killed on the main Derry road near Burt.

He received just an extra fortnight behind bars for his prison escape.

In a statement last night the Garda Representative Association hit out at the early release.

Donegal spokesman Brendan O’Connor said: “Today my thoughts are with the McLoughlin Family who are still mourning the loss of a beloved son and brother, and also with Gary’s colleagues and friends at Buncrana Garda Station. Mr. McDermott is returning to his family but Gary’s family will never have him back.

“The Garda Representative Association has consistently called for robust legislation with mandatory sentencing to protect our members. It is a damming indictment of current legislation that an individual who took the life of a courageous young Garda, who died protecting the citizens of this state will walk free after such a short period of time.

“The fact that a convicted Garda killer who had 91 previous convictions walked out of an open prison, left the jurisdiction and assaulted a Police Officer while unlawfully at large, only to receive an aditional 14 days sentence for these actions validates our assersions that current legislation does not provide a sufficient deterrant to protect our members.”