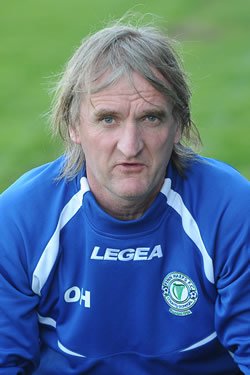 HARPS HOPING TO BOUNCE BACK IN CRUCIAL CLASH AGAINST WEXFORD YOUTHS

After suffering their first league defeat of the season on Friday night last in Athlone, Finn Harps will be hoping to bounce back in a positive manner when Wexford Youth roll into Finn Park on Friday evening.

Despite suffering their first loss of the season, having gone unbeaten for the previous twelve games, Harps boss Ollie Horgan wasn’t offering any complaints about the result.

“We didn’t do enough in the whole game on Friday night to get anything out of it,” said Horgan.

“We conceded from a corner kick which was disappointing but fair play to Athlone.

“We beat them earlier in the season from a corner kick also so we can’t complain.”

“We would need to be a lot better than last Friday to compete against them.

Horgan knows that the defeat will now be a test to his side and will be keen to see how they respond to losing their unbeaten league run when Wexford visit Finn Park on Friday.

“I think the Wexford game was going to be a massive test anyway – whether our run continued or not,” he said.

“As I have said before, they have a bit of everything, good players that play good football, strong and they have a great spirit about them.

“We would need to be a lot better than last Friday to compete against them.

Harps know if they avoid defeat on Friday, they will enter the mid-season break sitting on top of the First Division table.

However, Horgan isn’t getting too carried away with where his team are at the moment.

“I don’t think it matters where teams are at this stage of the season,” said Horgan.

“It only matters at the end so I will reserve judgement on our season till then.

“At this stage last year, there was little separating ourselves and Wexford but they took off in second half and finished 14 points ahead of us,” he warned.

Having gone most of the season without many injuries or suspensions to deal with, Horgan will have to deal with a number of players missing on Friday.

Ruairi Keating (hamstring) joins Brian McGroary on the injured list while Damien McNulty and Raymond Foy both face a one match suspension.

Horgan himself will watch from the stands as he starts the first of a two game touchline ban.

Wexford have proved to be somewhat of a bogey team at Finn Park over the years.

In their fourteen previous visits to Ballybofey, Youths have left Finn Park with something on nine occasions – 4 wins and 5 draws.

Although Thomas McMonagle’s goal was enough to give Harps victory over Wexford at Ferrycarrig Park earlier this season, Harps had only recorded victory three times in the previous fourteen encounters against Wexford – and two of these had come in the FAI Cup.

Wilfried Tagbo seen red when these sides met in Wexford back in April – he was the thirteenth Harps player to have been sent off in games against the Youths since they entered senior football in 2007.