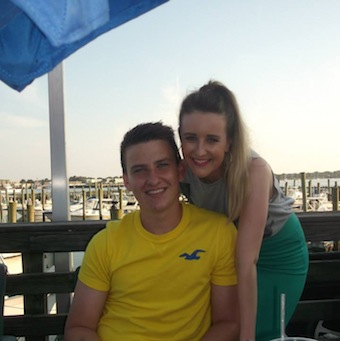 AMAZING REUNION AS OISIN MEETS MAN WHO SAVED HIS LIFE

A paramedic has told for the first time of how he saved the life of miracle man Oisin Merritt.

Oisin with girlfriend Josephine before his fall.

Dave Sullivan was speaking as he met the young Ballybofey man for he first time since Oisin’s horrific accident in Spain last year.

The former Finn Harps footballer clung to life after falling 20ft from a balcony while out with friends in Majorca.

But for the quick thinking of Dave, Oisin would almost certainly have died.

The pair met for the first time on Friday last as Oisin said a massive thank you to Galway man Dave.

Dave said he is astounded by the amazing recovery Oisin has undergone and wished his family well.

“I have been waiting for this day for so long and I am over the moon that it finally happened. He is such an inspiration and I feel I have made a friend for life.

“I wish him and his family all the best for the future,” he told the Irish Daily Mail.
Dave revealed how he found Oisin lying in a pool of blood after hearing him falling like “a bowling bowl” onto the ground.
“I said to my friend “Look, what you need to do is hold all these people back because if he hears all these screams, he is going to go into shock and we could lose him fast.”
Dave added “He was coming in and out of consciousness. I just kept saying to him “you’re grand. You’re after getting a little scratch o the back of your head.” His words were mumbled. I kept telling him he was fine. From what I can remember he asked “Am I going to die?” I started laughing with him and told him not to be ridiculous.”
Dave stayed with Oisin until an ambulance arrived.
Oisin suffered severe head trauma including several brain haemorrhages.
At one stage his family asked people to pray for him because they did not genuinely think he was going to make it.
But not only has Oisin astounded doctors by managing to survive, he now wants to play sport again.
“Everyone has told me that I am not going to play sport again but if I get this operation, there is a slight chance. I want to be one hundred er cent ready,” he said.